Forget the Clash. Once upon a time, there was only band that really mattered to a certain subsection of punk enthusiasts, and that band was the Minutemen. With a mixture of humor, politico-fervor and grit, the trio of D. Boon, Mike Watt and George Hurley bridged the gap between punk and virtually every other kind of music, recording a series of albums that sound as modern and relevant today as they did in the 1980s. “Our band could be your life,” Boon once said. To more than a few devotees, that’s exactly what the Minutemen were.

And then Boon died in an automobile crash, bringing an end to one of indie’s most influential post-punk bands and leaving Watt’s future musical efforts to forever be compared to his work with the mighty Minutemen. Hyphenated-Man, a collection of 30 rapid-fire punk-funk tracks that all fall under the two-minute mark (sound familiar?), won’t exactly liberate Watt from the shadow of Double Nickels on the Dime, but if you’re in the mood for a well-crafted, über-weird concept album, look no further than Watt’s latest.

A self-described “punk opera” inspired by the fantasy-land creatures in the paintings of Hieronymus Bosch, Hyphenated-Man finds Watt revisiting his Minutemen roots as he mixes elements of practically every genre known to modern indie. It’s a punk record at its core, but there’s plenty of blues (“Pinned-to-the-Table-Man”), sleaze rock (“Bird-in-the-Helmet-Man”), alt-country (“Baby-Cradling-Tree-Man”) and good old-fashioned grunge (“Arrow-Pierced-Egg-Man”) to be found as well. And no, you don’t have to have an art degree, know who the hell Bosch is, or even recognize the record as a concept album to appreciate it. In fact, the record is as far from highbrow as you can get, with Watt spending the brunt of it spewing F-bombs, drawling in his limited but endearing Kurt Wagner-like twang and occasionally barking like a ferocious beast. Good to see that the years haven’t turned the Minuteman, fIREHOSE-man and honorary Stooge into a softie.

Still, there’s something missing here, and it’s not hard to tell what that something – or someone, I should say – is. It might not be fair to continue to compare everything Watt produces as a solo artist to his previous full band efforts, but it’s tough not to when there are so many similarities between those Minutemen records and this one. In fact, several tracks – “Belly-Stabbed-Man,” “Hill-Man,” “Wheel-Bound-Man” – tend to sound like Double Nickels or The Punch Line outtakes. Not that these similarities are unwelcome, but listeners might find themselves aching for the full San Pedro punk experience, complete with Boon’s vocals, by the album’s midway point. Bottom line: Hyphenated-Man is probably most enjoyable if you’re unfamiliar with Watt’s past and not likely to get weighed down with Minutemen nostalgia. 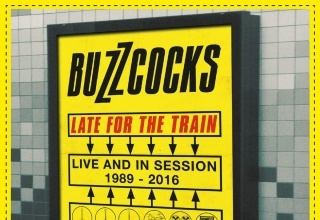