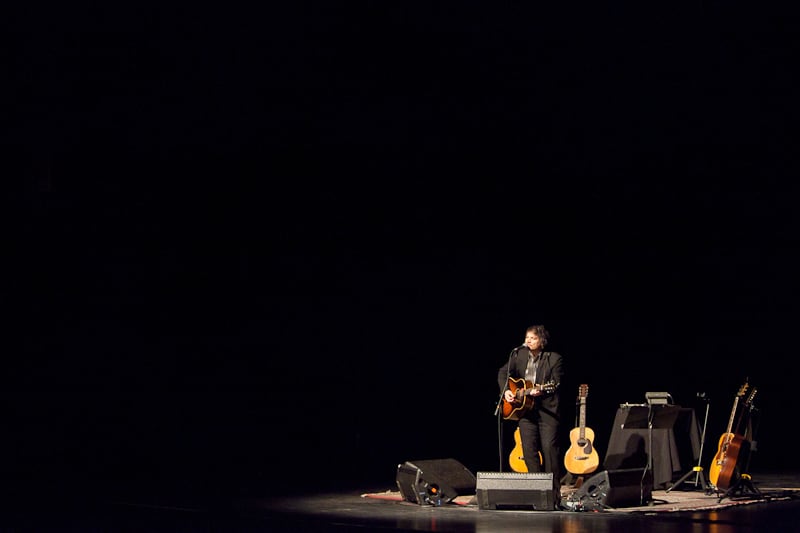 It had been about 10 years since Jeff Tweedy last made a solo acoustic stop in Toronto; you could sense the anticipation outside the Queen Elizabeth Theatre- a small venue usually reserved for stage plays- that everyone was gearing up for what was sure to be an intimate evening. It may have been a long wait, but the Wilco frontman didn’t disappoint, delivering a laid-back set of Wilco and Uncle Tupelo tunes while engaging the audience at every turn.

Local duo Snowblink provided the opening set, filling the theatre with layers of reverb and mesmerizing vocal loops. Like the woodsy wanderings of Andrew Bird, Snowblink brought just the right amount of charm and wonder; a mid-set cover of Bruce Springsteen’s “State Trooper” brought everyone to life after lulling them into a trance with lovely harmonies. With an antler-adorned guitar, lead singer Daniela Gesundheit plucked her way through material from the duo’s 2010 record Long Live. Unique and consistently compelling, they served as the perfect set-up for Tweedy.

When Tweedy made his way on stage, walking over to his five-guitar set up, it was immediately established that Toronto had missed him. The entire theatre rose in a standing ovation before a note was even plucked, catching Tweedy off guard in a sincere, heartfelt start to the evening. The all-acoustic event started off with the unusual choices of “In a Future Age” and a stirring, nearly unrecognizable version of “Spiders (Kidsmoke),” before kicking into a new song, which has currently been labeled “Open Up Your Mind.” It wasn’t until after this new song that Tweedy seemed to loosen up and chat with the audience, giving the evening a friendly feeling that resonated throughout the night.

Tweedy cracked jokes left, right and center during the acoustic unearthing of choice bits of his catalog; one patron asked, “How were the sandwiches at Sky Blue Sky?”-referring to the Wilco-themed sandwich shop in downtown Toronto. “It was alright. Not as good as their earlier, experimental sandwiches though,” Tweedy quickly quipped. This set the stage for what would be a lighthearted but memorable 90 minutes. “Muzzle of Bees” and “Via Chicago” got rousing ovations from the audience while many cheered on the songs before a full progression of chords had even been played. After playing one note of a song, the audience erupted, prompting Tweedy to stop and say, “There’s no way you know that already.” The audience replied by shouting out “Please Be Patient With Me” and Tweedy, who seemed genuinely humbled, said, “You guys know your stuff.”

Though the well-known tracks from Yankee Hotel Foxtrot and Summerteeth garnered the most enthusiasm from the audience, it was the deeper cuts that left the diehard fans among us drooling. After ripping through a rousing rendition of Loose Fur’s “The Ruling Class,” he quickly followed it up with “You Are Not Alone,”-a tune he penned for Mavis Staples’ 2010 album of the same title; an album he also produced-and the wonderful Uncle Tupelo track “Wait Up.” Saving the best for last, Tweedy gave a four song encore-a sing along version of “Jesus Etc.,” gorgeous, stripped down renditions of “California Stars” and Shot in the Arm,” closing the night with an unplugged, unamplified version of “Acuff Rose”-that left the theatre in a whirlwind of cheers and anticipation for the spontaneously added show the next night.

Though Tweedy claims his solo shows are used to get out of the studio and run through some tracks alone before heading out on tour with Wilco- a kind of spring training warm-up session- he delivered a show that was compelling, funny and intimate, playing a set that could satisfy both the newbie Wilco fans and the ones who saw the original incarnation of the band play Toronto’s Horseshoe Tavern way back in 1997.