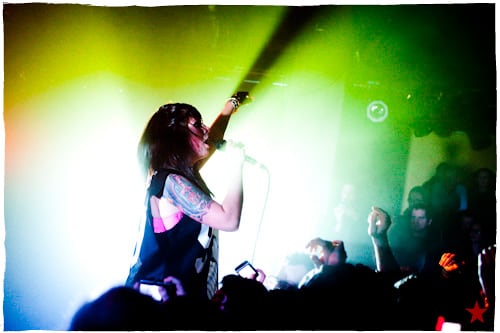 This scene has happened so many times: I’m at a show, the band’s about to take the stage, I’ve successfully jockeyed for a good position on the floor and… awww shit. I left my earplugs in the car. There’s probably a dozen of ’em in the glove compartment, but that ain’t helpin’ me now. So on the night of the Sleigh Bells show, I knew there was no margin for error; those spongy little nubs made it to my pocket hours ahead of time. Because if we know one thing about Sleigh Bells, it’s that they will CRACK YOU IN THE SKULL with maxed-out, squeally distortions amped up to a merciless volume. And if there was any doubt, the formidable wall of Marshall stacks that lined almost the entire width of the stage presented a strong suggestion that we might literally be blown back a few feet once this thing got going.

It was with a menacing sort of drama that the duo took the stage. Guitarist Derek Miller cranked out the doomsday riff of Black Sabbath’s “Iron Man” as frontwoman Alexis Krauss prowled through a haze of dry ice in a badass black leather jacket. Just before transitioning into show opener “Crown on the Ground,” Krauss shed the jacket, revealing what I thought to be a Chicago Bulls jersey except… on the front was “Bells” and on the back was “Slay,” so clearly this was no homage to NBA MVP Derrick Rose. (Note to merch people: I would totally buy this.) Paint-splattered leggings of shiny spandex, a studded leather glove, a pair of dinner plate-sized hoop earrings and, improbably, a clean white pair of Keds rounded out this hardcore ensemble. Krauss started out by riling up the audience (“I wanna fucking HEAR YOU!”) but few and far between were those moments of engagement; though perhaps it better suits the Bells’ style to just rip through their songs uninterrupted, no time for chit-chat when a wave is sweeping you into the undertow.

Sleigh Bells whipped through all of the Treats tracks save “Run the Heart,” roughly in the order they appear on the record. Replacing “Heart” with superior B-side “Holly,” Miller took his only spin on main vocals, a necessary respite for Krauss who was charged with the task of replicating all of the ear-splitting shrieks, screams and chatterbox vocalizations that, on the album, are stapled into the songs as samples. At times Krauss leaned her mic into the crowd to enlist our participation but you try singing along with the syncopated triplet-stutters of “Riot Rhythm”: “Uh/ Uh-uh-uh/ Uh uh-uh/ Uh-uh uh/ Uh-uh-uh… You gotta march!” Easier just to yell out the word parts and stomp one foot on the downbeats. If a quiet moment was to be had, it was during would-be ballad “Rill Rill,” the hammered chimes and high-octave melody inviting Krauss to slink instead of shatter. Her fluid, tattooed arms undulated, a dreamy confusion invoked by lyrics such as, “Click click/ Saddle up/ See you on the moon, friend.”

Miller and Krauss seemed to be leaving the stage at the conclusion of “Rill Rill” but I thought for sure they were just slugging some water off-stage. It had only been half an hour! But really, that’s all they got. Touring behind a debut LP that lasts only 32 minutes, it doesn’t take long to exhaust the catalog. My hopes for hearing some adventuresome covers dwindled, but a kick-ass encore was sure to come, as Sleigh Bells would never just leave those A machines on the table. Ending with a breathy “Rachel,” thrash-punk screamer “Straight A’s” and finally, the non-sequitir-meets-roman-candle mantra of “A/B Machines,” Sleigh Bells closed out the show leaving sweat, melted make-up and the beginnings of tinnitus in their wake. Filing out of a venue shouting, worn out and ugly? Not much feels more gratifying than that.