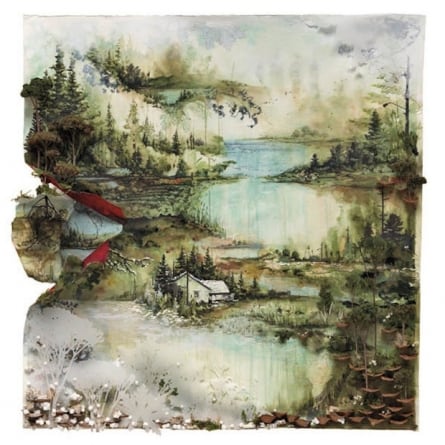 It seems fitting that Bon Iver’s second full-length should be eponymous; moreso than the apocrypha-burdened For Emma, Forever Ago or the spotty Blood Bank EP, Bon Iver shows Justin Vernon making bold, gargantuan strides toward fully realizing whatever it was that Bon Iver was intended to be. I’ll try to keep this rehash of the now-threadbare rock-writer story to a bare minimum: Vernon intended the self-recorded For Emma to be demos, sketches that would be re-recorded with the investment of an interested label. With the explosion of success that followed For Emma (which afforded the opportunity for Vernon to smoke dope/shoot hoops with Kanye), Bon Iver represents the full, sweeping scale of what Vernon intended in the first place, this time with his touring band in tow.

Don’t get the impression, however, that Bon Iver’s songs are louder versions of “Re: Stacks” outfitted with a second guitar and drums; Vernon also conscripted Greg Leisz (pedal steel), Colin Stetson (sax), Mike Lewis (more sax), C.J. Camerieri (more brass) and a slew of other indie behind-the-scenesters to further “process” these almost-homespun folk rock tunes into something a little weirder and definitely bigger. Bon Iver’s a deep record sonically, providing a steep fall for a listener inclined to explore its layers and layers of usually organic instrumentation that form a thick patina whose outcome is something I’ll half-seriously describe as “rural indie ambient.”

It hardly gets better than album opener “Perth,” the first of several tracks named for places. Layers of Vernon’s vocal harmonies intertwine with warm, creamy, clean electric guitar and synth, culminating in the bombastic climax of Sean Carey’s double-kick and bell-like guitar riffing; somehow, the knowledge of the song being inspired by Heath Ledger’s death takes away from it, but, like For Emma’s mononucleosis/Walden baggage, it’ll be hard to disassociate. “Minnesota, WI” works out delicate figures of finger-picked guitar around which swelling sax, pristine ’80s synth sounds and fuzzed-out bass pump blood into its simple skeleton. “Hinnom, TX” is made up entirely of what’s either bubbling synth or seriously processed electric guitar – it’s hard to tell, but easy to be reminded of Vernon’s work with side project Gayngs.

Bon Iver’s drawbacks remain Vernon’s layered vocals – at once unquestionably his own sound, but also something of an acquired taste; it’s easy sometimes to feel like you’ve had too much and need to push away to hear something else. Also, with some of the best songs at the front, the remainder of the record, as pretty and sonically rich as it is, can start to sound samey; sometimes you need to stop and take a break when walking through the woods or else your hike becomes drudgery. Yet Bon Iver is good enough (the straight-up Bruce Hornsby attempt “Beth/Rest” at album’s end notwithstanding) to warrant repeated listens and it stands to get better when the leaves start falling and the temperatures get cooler.