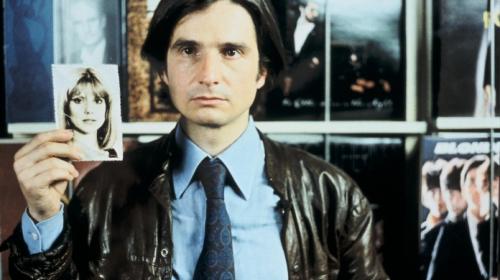 Released in 1979, François Truffaut’s Love on the Run completed the cycle of Antoine Doinel films that began in 1959 with The 400 Blows and continued on through Antoine and Colette (1962), Stolen Kisses (1968) and Bed and Board (1970). Although the entire series is currently available for purchase in a handsome package released by The Criterion Collection, the five films that comprise The Adventures of Antoine Doinel are far from a unified whole.

When asked to contribute the French section for an international co-production entitled Love at Twenty, Truffaut at first demurred, claiming he had no ideas. Yet when he hit upon the idea of checking in with his most famous creation three years after the events depicted in The 400 Blows, he at first assumed it would be a one off deal. Antoine and Colette is in many ways a sort of epilogue or appendix to the previous film, and especially when set off against the latter three entries in the series, the two are seen to have much in common. Both are in black and white and filmed in the anamorphic 2.35:1 ratio, and both are decidedly situated within the heat of the Nouvelle Vague moment, displaying all of the daring narrative qualities and innovative visual brio that goes along with that appellation. In contrast, the subsequent color films are in the standard 1.66:1 aspect ratio, and none of them attain anywhere near the experimental excitement as the earlier films in Truffaut’s career. But there is another, more natural way of dividing the five: there is The 400 Blows and then there’s everything else.

As François Truffaut himself acknowledged, the problem with the Doinel cycle is that they fail to constitute an organic whole. While it is undoubtedly true that the first film is far and away the most artistically successful of the series, the others shouldn’t necessarily be penalized for failing to live up to the standards set by one of the greatest films of all time. Deciding to produce a sequel to The 400 Blows at all was a terrible idea. The power of that film’s iconic freeze frame on the beach could only be diminished by cluing the audience in to what happened next. The resonance and pathos of that moment at the sea’s crossroads resides in its radical ambiguity – in its limitless possibility – and to concretize a path for Doinel was in my opinion Truffaut’s fatal mistake. But after having made the decision to continue on with Antoine and Colette, Truffaut should have most definitely ended things there. If he had, the short film would have remained a curiosity in his oeuvre, a cute but ultimately slight continuation of his earliest and perhaps greatest triumph. But by forging on he created for himself an artistic problem which he largely failed to solve.

If the final trio of films seem in many ways interchangeable, this is because Truffaut failed to develop Doinel as a character, freezing him as he was as a 17-year-old circa Antoine and Colette – curiously old-fashioned, yet immature and impulsive; given to grand romantic gestures yet as blind to his deficiencies as a lover as he is to his inability to mature as a man. When we meet him in Love on the Run, Antoine (Jean-Pierre Léaud) is in his early thirties, besotted by his new girlfriend, the much younger Sabine (Dorothée). From the start it is clear that Antoine has not grown much since last we saw him – after nearly missing his court date to finalize his divorce from his wife Christine (Claude Jade), he recklessly boards a moving train (sans ticket, of course) after spotting his former flame, Colette (a radiant Marie-France Pisier, who co-wrote the film with Truffaut) through a window.

Colette has been reading Antoine’s autobiographical novel, which he was previously shown working on, much to the detriment of his marriage, in Bed and Board. Entitled Les Salades de l’amour (which the subtitles bizarrely render as “Love and Other Troubles,” even though Google Translate offers up the infinitely more intriguing “The Salads of Love”), the book is a thinly disguised roman à clef featuring the trials and tribulations of one “Léataud” (haha) as he emerges from a traumatic childhood and learns to navigate through a minefield of female troubles. As Colette reads, the film gives itself over to various flashbacks (both from the earlier films and newly-created) that illustrate the various passages in the novel. Love on the Run returns to this device again and again, usually preceded by a push-in on the face of whichever character happens to be reminiscing at the time, as they gaze off into the middle distance with a dreamy look. The device comes off as awkward as it sounds, resulting in a film that has a curiously unfinished feeling, consisting as it does of so many recycled moments. The flashbacks to the first two films are particularly jarring, due to their radically different visual styles.

Colette, now a lawyer, had actually made a brief appearance in Stolen Kisses, encountering Antoine on the street with her husband and infant in tow. Narcissistically self-involved as ever, Antoine is so intent on trying to make it with Colette that he fails to even ask her how they are doing. We later learn that her husband had left her after their son was killed in a traffic accident, which lends Colette’s decision to defend a man accused of murdering his child a heavy (if rather melodramatic) weight. Colette made this confession to Christine after meeting her at Sabine’s apartment, where they had both gone to plead on Antoine’s behalf. The scene between the two women is one of the strongest in the film, and yet as they gently reminisce about the perils of being romantically entangled with Antoine Doinel, one of the biggest flaws in Truffaut’s handling of the series is brought to the fore. Neither of these women should be helping Antoine at that moment, especially not his ex-wife. Time and again the women in Antoine’s life are shown to coddle and protect him, even though this results in his inability to mature. It seems that Truffaut got stuck in a certain mode when it came to Doinel, failing to figure out a way to realistically create an arc for the character. Having every female around him be infinitely more mature and patient than his protagonist was a ploy that backfired for Truffaut – while effectively highlighting the deficiencies in his psyche, having this safety net beneath Antoine at all times created a situation where it was against his best interests to develop and transcend his immature tendencies, serving to create a static and ultimately uninteresting character.

One of Truffaut’s biggest drawbacks as a storyteller was his tendency to hit some of his themes too directly on the nose, at times baldly stating his concerns in awkward exposition. This tendency is evident throughout the series (except, notably, in The 400 Blows). For example, rather than letting the audience deduce (the rather obvious) conclusion that Antoine has a desperate yearning for a surrogate family and so continually strives to finagle his way into his various girlfriends’ parents’ good graces, Truffaut has Doinel explicitly state this on more than one occasion. Similarly, instead of allowing the viewer to note the eerie similarity between Christine and Sabine (both blonde, with similar facial features) and Antoine’s mother (Claire Maurier), Truffaut has Doinel reveal that the main character of his novel was incestuously fixated on his mother as a child.

And then there’s the Léaud situation. Jean-Pierre Léaud’s performance as Antoine Doinel is one of the greatest things about The 400 Blows. His naiveté and earnestness as an actor served him well when it came to channeling Truffaut’s adolescent traumas and translating them to the screen. His spontaneity and guilelessness somehow hardened as he grew older, the free and unselfconscious aspect of his performance freezing into a series of ticks. Although he was better in some films than in others (fine in Godard’s Masculine Feminine and Truffaut’s Two English Girls, not-so-fine in Bertolucci’s Last Tango in Paris), one suspects that the reason so many directors continue to employ him has less to do with his abilities as an actor and more to do with his status as an icon. In The 400 Blows he was unaffected and loose, his every emotion clear to the camera’s gaze. Yet as he got older he became more guarded, his emotions less evident on screen. Or it could be that he learned the wrong lessons from his apprenticeship with Godard, adopting a Brechtian distance in his performances that was difficult to shake off when it was not needed.

All of this is not to say that Love on the Run is not without its charms. Even in Truffaut’s weakest efforts, he was still unparalleled in his ability to render everyday moments with a certain romantic looseness of style, an ability that serves him well here. Even at his most unlikeable, Antoine is still great to look at, fabulously photographed as he is by the great Néstor Almendros. Marie-France Pisier (who tragically died in April of this year in a drowning accident), is particularly excellent in the film. Her performance here, as well as in Jacques Rivette’s Céline and Julie Go Boating, has made me eager to seek out her work.

The Adventures of Antoine Doinel hold a unique position in François Truffaut’s oeuvre: their beloved status seems to owe quite a bit to the reflected glory of the only genuine classic in its ranks, although all of the lesser entries have their own minor key qualities to recommend them. However, The 400 Blows remains a singular achievement in the history of film, an unimpeachable masterpiece whose light refuses to be dimmed, no matter how many substandard sequels it’s been buried under.

This author has not added a biography. Meanwhile Shannon Gramas has contributed 90 posts. Click here to view them.