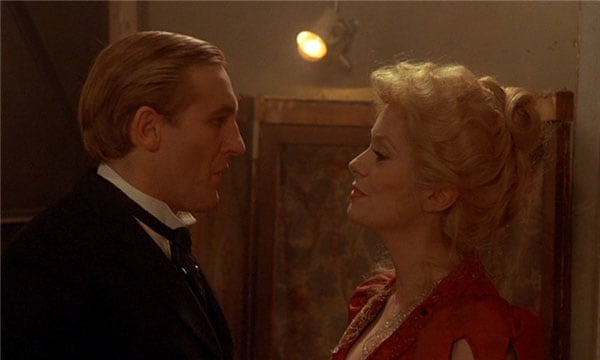 Although not part of a concrete cycle like his acclaimed Antoine Doinel series, it is notable that his next film after the concluding Love on the Run (1979) was intended as the second part of a trilogy of films dealing with performing arts. The first, 1973’s Day for Night, dealt with his medium of choice, film, while the third, scripted but unproduced before the director’s death, was intended to deal with music hall entertainment. The Last Metro delves into the world of theater, during the most dangerous of times: the Nazi occupation of Paris. But the film itself ultimately becomes a reverie not so much on drama as on claustrophobia and closeness.

Truth be told, The Last Metro at first seems to be an extraordinarily dull movie. It certainly doesn’t appear to live up to Truffaut’s legacy as an innovator and iconoclast. While his most inventive years were behind him by 1980 (and the 1970s largely saw him relying more on his prowess with character and story than on his early technical innovation), the film feels worn out and lifeless, the kind of love triangle during wartime routine that was already hackneyed years before. But it’s a bait and switch, a shrewd bit of toying with viewer expectations; rather than the romantic drama that’s promised in the first few scenes, the film provides an episodic evolution of entanglements and the subtle ways people adapt to life-threatening dangers.

After a bit of narration that briefly explains the occupation of France and the Vichy government, the film’s title is explicitly explained: due to the Nazi curfew, Parisians traveling in and out of the city each day were under intense pressure to catch the last metro out for fear of harsh punishment. This rather clumsy bit of symbolism (not to mention the boldly unsubtle narration) is actually a clever feint on the director’s part; the metro is never seen in the film and rarely mentioned, not even making it to MacGuffin status. The plot begins with Bernard Granger (Gérard Depardieu) trying to pick up a passing woman (Andréa Ferréol) on the street, all the while claiming that he never does this. As we later see him using an identical pick up line on multiple women throughout the course of the film, it’s pretty certain we can doubt that. But again, expectations of what kind of movie we’re watching here are thwarted. He fails to win the woman, and she turns out to be employed at the same theater he is traveling to perform in a new play. His leading lady is Marion Steiner (Catherine Deneuve), who is also the new owner of the theater after her husband/director Lucas (Heinz Bennent) fled the country to escape being arrested for being Jewish. Or so the story goes; secretly he’s hiding in the basement of the theater, directing through an intermediary and enjoying a secret domesticity with his wife. It can’t help but feel like a subtle riff on the Phantom of the Opera, but the true heart of the story is the depth of the staff of the theater.

Truffaut and cinematographer Néstor Almendros shot The Last Metro in muted tones, largely keeping to a palette of browns and shadows. Initially, it appears drab and unremarkable, but as the film goes on and keeps to almost entirely interior scenes, often underground and at night, it becomes something more. The film is about the tightness of confined spaces (even an entire city), and the camerawork reinforces that masterfully. As the characters that populate the theater go about their routines, rehearsals and errands, there’s an increasing sense of tension as the war goes on, but also in the sheer sense of confinement and pressure of the upcoming play. Bernard is secretly aiding the resistance, but much of his tension comes from his unrequited passes at the women at the theater. Marion struggles with the political machinations needed to keep the theater open and relatively unencumbered from a rabidly anti-Semitic critic (Jean-Louis Richard), but also with her marriage to the dour but loving Lucas and growing feelings for Bernard. Both Depardieu and Deneuve shine here. The latter’s reputation for distance is played perfectly as the guardedness of a woman under incredible pressure; a key scene has her glibly comforting a wildly frantic Lucas before opening night, only to cut sharply to her noisily vomiting from stage fright. Similarly, Depardieu’s De Niro-like intensity is used well, making him come off as both passionate and somewhat sleazy.

The Last Metro was overwhelmingly critically praised when it was first released and it’s not difficult to see why. It won 10 César Awards (including best actor and actress for the leads and best director for Truffaut) and received nods in both the Oscars and Golden Globes. It’s Truffaut at perhaps his most masterful and graceful; he directs like a veteran athlete out of his physical prime but with his skills at full capacity. Rather than trying to ape his younger innovations, it’s a movie built on subtle knowledge of the medium and a deep knowledge of how to direct the audience watching the film, not just the actors and crew making it.