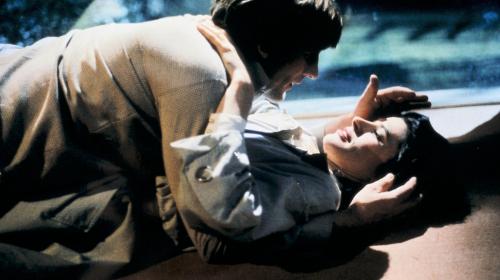 The Woman Next Door has a fairly basic plot of infidelity as new couple – an air traffic controller and his mysterious artist wife Mathilde (Fanny Ardant) – moves in next to Bernard (Gerard Depardieu) and his wife. It turns out that Mathilde and Bernard were incredibly passionate lovers in their younger days – until Bernard’s constant abandonment forced her to cut him off – and so (after the requisite brief period of denial) they rekindle their romance through clandestine meetings in hotel rooms. But fear not – they try to get the same room every time.

Alternately, the plot of The Woman Next Door is this: New Wave moves in next door to established cinema giant François Truffaut. It turns out that François and New Wave were passionate lovers years ago – a relationship that begat such children as Antoine Doinel, Jules and Jim – and so (after the requisite brief period of denial) they rekindle their romance through public meetings in art house films starring Gerard Depardieu. But fear not – they try to make it like it was back then.

I’m not crazy. Bernard is clearly Truffaut, with a steady job and a stable lifestyle. Lord knows the last time he’s had even a modicum of excitement in his life (The Man Who Loved Women?) That he’s played the star of Truffaut’s WWII film The Last Metro sends a chorus of mental alarms a-ringin’ – to me, at least. Upon seeing Mathilde again, he indulges in emotional impulses suited for a younger man – one assumes, the man he used to be back when he was with her.

As such, Truffaut tries to be New Wavy once again, bookending the film with the tennis club head Madame Jouve (Véronique Silver) directly addressing the audience in front of a court. She remarks that you’d think she was a tennis pro, but once you zoom the camera you’ll see the truth – and so, the camera zooms. Like Truffaut’s ’60s ilk, he brings attention to the artifice of film and the lie of the camera, but this time it feels perfunctory looking at it that way – the way jump cuts in the film seem more like somebody fucked up a take and not because the auteur is trying to shake us from cinematic complacency. It makes more sense if he’s using that self-referential zoom out to bring attention to his own age. You see, the calm, wise, older woman Jouve is a victim of passion – she once jumped out of her window because of her lover and lost a leg in the process. It’s as if Truffaut is telling us that he’s getting old and that his film is wounded, a result of trying to rekindle old passions.

Mathilde is the only artistic person in The Woman Next Door, an illustrator prone to swooning prompted by the slightest bit of emotional duress – a being of feeling in a world of thinking. Ardant, in her breakout role, brings a grounded etherealness to Mathilde, hiding her deep artistry under an affectation of domesticity. Ardant has a very youthful face, as if she hasn’t aged much in the years. She’s almost like a lost muse, except Bernard, like Truffaut, isn’t really in any place to return to his old inspirations. She’s too wild, too passionate, too impermanent. Bernard, his wife and even Mathilde’s husband are like stone obelisks in comparison. You can imagine them planted in one place forever, while Mathilde threatens to burn out like a match.

Bernard, then, is someone trying to hold onto that match, which makes him act insane. It’s a great performance, watching Depardieu slowly unhinge at the frustration of being unable to return to his past, only to re-hinge out of the necessity of being a grown man with a wife and kids. But Bernard is Truffaut and Truffaut is an artist, and as an artist it can get hard not to indulge yourself. As such, Truffaut finishes The Woman Next Door with a bang, turning his domestic melodrama into something one might call domestic noir, complete with a be-trenchcoated meeting in an empty building full of shadows – yet another vestige of his earlier work.

But this is a melodrama, and Truffaut is surprisingly sentimental for a New Wave guy, going all the way back to The 400 Blows. He ends his film (prior to the Madame Jouve bookend) on a brilliant note as a voiceover recites a police report of the climactic scene, reducing all the passion to sterility. It’s a fantastic juxtaposition, but I can’t help but think that Truffaut is also trying to defend his own work. The plot sounds generic on paper, but it’s the actual passion and execution that gives it life – even passion that you can’t quite rekindle.