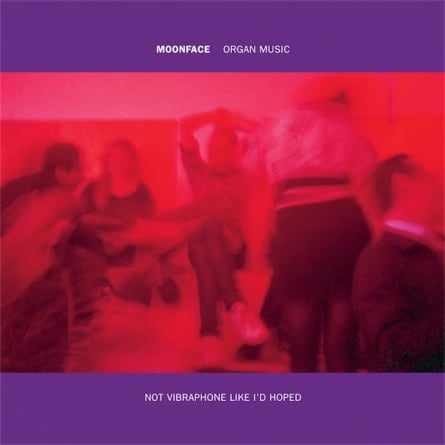 Spencer Krug is a busy man. So busy, in fact, that one wonders if the group he’s most associated with, Wolf Parade, would not have been put on indefinite hiatus if Krug hadn’t inserted himself into a side project (Swan Lake, with Carey Mercer of Frog Eyes and Destroyer’s Dan Bejar) while at the same time pursuing his solo effort, Sunset Rubdown. How does Moonface fit into this cramped schedule? Well, Moonface is Krug’s second solo outfit, Organ Music Not Vibraphone Like I’d Hoped being his first full-length record under the moniker, following last year’s Dreamland EP: Marimba and Shit Drums.

Where Moonface and Sunset Rubdown diverge, primarily, is in instrumentation; whereas Sunset Rubdown’s is a full-figured, full-band sound, with Krug’s unhinged guitar and literate lyrics punctuating layers of keys, Moonface is more stripped down. Bereft of any organic qualities, save for the fecund imagination of Krug, Organ Music is all programmed cymbal, pulsing organ, multi-layered tones and busy, frenzied hooks providing the thrust for its five, six- to eight-minute tracks. The overlap is in Krug’s lyrics, which remain some of the best in indie music, rounding about themselves in tripped-up phrasing, clever turns, asides, hiccups and chants.

Owing to the length of the individual tracks, a good portion of every Organ Music song (or at least the first four) is devoted to moving slowly into the groove Krug has carved out for it, taking on more elements until it falls apart in shambles, exhausted from the exertion. Often, a single organ line rides high above the fray like a horseman urging the tired beast forward against the will and interest of both. Whether this architectural approach or lurching pattern is intentional on Krug’s part, or the natural inclination of his inner, subconscious songwriter, is a matter for speculation. In either case, the formula works. After all, systematically constructing chaotic momentum–while also making it appear completely accidental and natural, like the randomized, totalized growth of viral weeds–is something Krug, whether with Swan Lake, Sunset Rubdown or Wolf Parade, has long been adept at.

The opening track, “Return to the Violence of the Ocean Floor,” contains a seed of continuity established between Krug’s two solo projects with the mention of the “idiot heart” that figures in track two of Sunset Rubdown’s conceptual 2009 record, Dragonslayer. Here, though, it is not the centerpiece, but tacked on to the tail end of a few verses, after Krug details how his spirit lusts to return to a more primordial state: “Should’ve been a writer, should’ve played guitar/ But your face looks like a statue in the dark / Like a candle that is held up to a mirror / Or the terrible glimpse of a shark/ Within your idiot heart.” Accompanied by wholly menacing half-whispers and staggered double-manual organ notes, this salvo is an effective opener, stepping in patchwork waves that ebb, flow and drip down, “Grain by grain.”

“Whale Song (Song Instead of a Kiss)” keeps the maritime theme afloat in the song titles, but abandons it in content, beyond mentioning the whale which Krug promises his love will live in the pond in the garden he will plant for her. According to Krug, whose vocals drift in two disparate, separate and often syncopated streams, “Whale Song” is “More than random flowers bursting from my mouth/ More than shit whispered into the crook of my arm/ Not unlike the murmurings coming from caves/ With their mouths against the sea.” Evocative stuff, and the music is fit to match its casual intensity. On the other hand, “Fast Peter” is less misleading in its titling, communicating both prevailing features of the track in two words: “Fast” (tempo) and “Peter” (subject matter): “So Peter loves a girl/ the way that only Peter does/ He told me all about it on the balcony/ When we were high on drugs.” Later, the song reaches its apex in pitch and pitched vocalization with, “So Peter’s leaving town/ Who even does that anymore?” Besides its pacing, it’s got a certain even keel to it, never losing balance and tipping into the void, closing with a heaping of final, solemn vocals and organ keys sweetly fading out into oblivion.

“Shit-Hawk in the Snow” begins with deep bass tones and drum loop, like a Wolf Parade song waiting for its first licks of Dan Boeckner guitar (which, it being a Moonface track, never arrive). In subsequent bouts of ascending and descending scales, handclaps and wheeling organ chords, Krug dismisses his friend, “Smoking cigarettes like it’s 2003,” and follows it with another oceanic line: “You watch her wipe the plate clean/ And you see that the plate is the sea.” The final track, “Loose Heart = Loose Plan” is the calmest, most peaceful on Organ Music, never breaking sweat or losing its cool, barely burning through its six-and-a-half minutes before Krug delivers its final cue, probably the best line of the album: “You said ‘Come on, let’s kill individual will!’/ I said ‘I will. I will. Oh I really, really will.’.” It’s not an album for the ages, but Organ Music Not Vibraphone Like I’d Hoped is certainly another impressive constellation in what is already a bright sky for Spencer Krug, a musician and songwriter as prolific and awe-inspiring as night is starry.