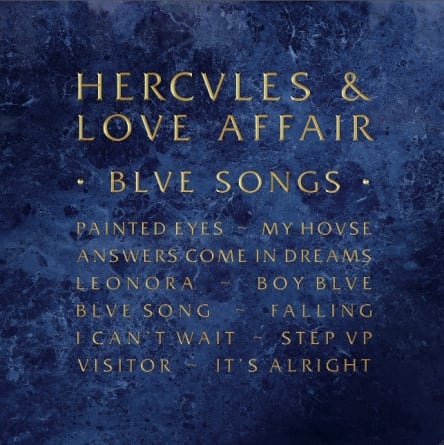 Rarely does a band’s name palpably describe its true aural colors. One might conjecture, then, that Hercules & Love Affair and its epithet are equally goofy and flamboyant. Hercules & Love Affair’s eponymous debut album was widely considered an indelible addition to the gay club scene. Here, they continue to deliver the expected, and with as much rainbow pride as any national anthem.

Some basics for those who don’t frequent the club scene: The Love Affair is helmed by DJ Andy Butler, and showcases an array of singers (most notably collaborator Antony Hegarty, who has since departed, on their debut). Butler’s influences like Lady Gaga and Sinead O’Connor offer but a narrow actual glimpse into their true neo-disco front. Hercules & Love Affair was a bona fide disco album containing enough ’70s retro soul and fun-loving beats to power a tour bus for a Village People reunion.

Blue Songs, which was released in Europe last January, trades in certain timbers and tannins for others, and finds the band’s disco style in the next decade, offering a modern club approach. The result is a more synthesized and polished Love Affair. Sometimes this works effectively, as with the opener “Painted Eyes,” which begins as minimal Goth house and slowly builds into an original, orchestra-speckled hybrid of old and new house and dub styles. Elsewhere, they straddle the threshold of pretentiousness, sacrificing the melody of songs like “Visitor” and “I Can’t Wait” to superfluous samples, limp vocal performances and flashy production value.

In the midst of all the bumping and grinding, the Love Affair lays out three unexpected ballads. “Boy Blue” is built around an affable acoustic guitar part and is the one of two songs sans subwoofer. Newcomer Shaun Wright stretches his gender-bending diva vocals into the lush mood, proving versatility beyond other dance numbers he contributes to (“My House”). The proceeding title track acts as another low-key companion tune to “Boy Blue,” sounding like a familiar Toto b-side with its worldly clarinets and percussion. The quiet, piano-lead closer “It’s Alright” further deviates from the Love Affair’s normal approach, and although it might be an awkward mood-killer during a live set, shows us that they can do other things just as effectively. But the Love Affair need to figure out how to seamlessly incorporate such disparate styles. Unlike their consistently conceived debut, Blue Songs is more of a playlist than an experience.

Still, fans will surely get their money’s worth. Blue Songs includes several throwaway remixes of “My House” and “Painted Eyes,” but makes up with three accessible bonus tracks, including a cover of the xx’s “Shelter” that completely eclipse many of the album’s a-sides. The album won’t have the same crossover appeal, but a little digging through the muck will grant some solid beats and ballads.