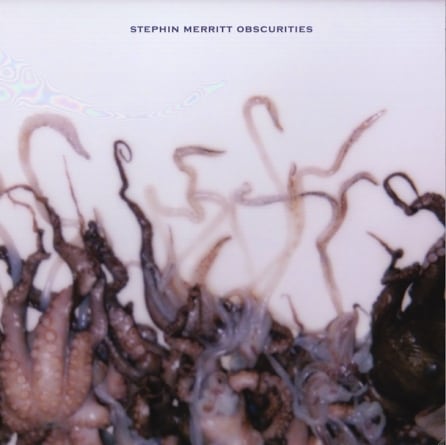 Songs are often relegated to the cutting room floor or released on limited run vinyl that only superfans or speculators will purchase for a very simple reason: they tend to, to use the professional term, suck out loud. But there are rare exceptions, and Obscurities is indeed one. A collection of previously unreleased songs and singles that predate 69 Love Songs and cover Stephin Merritt’s work with the Magnetic Fields, the 6ths and the Gothic Archies, much of it compares favorably to the artist’s more celebrated albums. Even better, this batch of unrelated songs recorded years apart actually feels like a focused effort, which speaks to both the quality of Merritt’s songwriting as well as his tendency to closely guard how and when his music is released.

Most of the inclusions on Obscurities are typically skewed Merritt love songs that find the musician again experimenting with various genres like a meth tweaker trying to find that perfect mix. The fact that three of the five “new” songs come from an unfinished sci-fi musical with Daniel Handler/Lemony Snicket – now there’s a can’t-miss recipe for theatrical brilliance – is easy to look past given how good they are: “Forever and a Day” is another delightful Merritt-on-ukulele devotional ode that bears a passing resemblance to “The Book of Love,” while the like-minded “The Song from Venus” and “When You’re Young and In Love” can thankfully be appreciated outside of their dweeby sci-fi context. The other two previously unreleased tracks split just about evenly. It’s difficult to understand why “The Sun and the Sea and the Sky” never landed on a proper album – it’s that good, a wry take on that excessively pastoral love-of-nature nonsense still in vogue – but not so with “Scream (Till You Make the Scene),” a bizarre synth/techno/club amalgamation that quickly unravels like the throwaway it is.

The repackaged tracks here are usually spot-on, especially those in which Merritt ransacks music’s past and puts his own unique imprint on it. “Rats in the Garbage of the Western World” is described by the musician as a tribute to the Cure and features a wonderfully pessimistic sentiment (check the song title again); Susan Anway’s deviously innocent vocal turn on “Take Ecstasy with Me” is subtly humorous; “Rot in the Sun” is more convincing in its grunge styling than many bands from that flannel-friendly era. Meanwhile, country ballad “Plant White Roses” – according to Merritt, a parody of Patsy Cline – is nevertheless a beautiful song with fatalistic sad-sack lyrics to boot. True, there are some curiosities or worse here: the best thing about “When I’m Not Looking, You’re Not There” is its title, and “Beach-a-Boop-Boop,” written by an early-teenage-years Merritt along with a pre-teen Shirley Simms, unfortunately sounds exactly like its title suggests.

It’s likely that a listener unaware of its back story could be convinced that Obscurities is the latest set of new songs from Stephin Merritt. Partly this is because Merritt’s records, at least up to and including 69 Love Songs, never really fit into one narrowly-defined genre or style anyway, so it’s not too disorienting to hear Merritt hop around from country to club to pop to whatever from track to track. But mostly it’s because these songs are so inventive and well written that they never feel like toss-offs or discarded junk. The Magnetic Fields-philes in the world can turn this release into a tedious exercise in discographical analysis if they wish, but for the rest of us, Obscurities is a worthwhile standalone album in its own right, regardless of its contents’ origins or the manner in which they were previously issued.