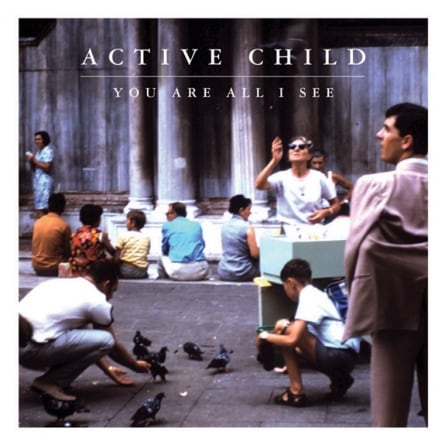 You Are All I See

You Are All I See is the debut full-length from Active Child, a project of Los Angeles-based harpist/songwriter Pat Grossi. While obvious Joanna Newsom comparisons will likely be tossed around based of that fact alone, what Grossi reaches for with Active Child is much more of an exploration in aesthetic than anything else. The music itself is more texture than notation, with broad synths, big ’80s drums and ethereal vocals. Grossi’s harp is mostly used to create dynamics within an otherwise expansive sound that’s mostly driven by his angelic falsetto. The result is something like what the Vienna Boys Choir would sound like if conducted by Annie Lennox.

Grossi approaches his atmospheric art-pop with a keen ear for its mood. On You Are All I See, he creates carefully detailed landscapes that flow and sway with a distinctly new wave aesthetic. The album moves like water, with a glossy production that gives it a drugged-out feeling and makes it seem like the notes are simply sliding off each other. A beautifully glistening harp plays an important role in the character of this sound, although far less than Grossi’s sense for mood, which is carefully managed by his oddly nuanced voice that seems to float around the music in tight, multi-tracked layers invoking trance. It’s so blissful it should be weaponized, and the fact that most of the lyrics on You Are All I See are barely discernible seems unimportant.

Songs like “Ancient Eye” and “Hanging On” spotlight Grossi’s penchant for choral music specifically and feature utterly gorgeous vocal harmonies that flow in and out of each other, picking up from the inertia of the previous layer before passing it off to the next, while the music swirls like celestial bodies.

Despite its adventurous explorations in style, You Are All I See’s weakness lies in its overtly stylized themes that persist throughout. The dynamics of the Active Child sound seem to exist solely within the framework of its spacey atmospherics, and when Grossi steps outside of this he toes into territory that seems out of place. As a result, there are some oddities in his musical references, despite his ability to unite genres inside the cloudy haze of the sound. The electro R&B track “Playing House” has a few cringe-worthy moments (Auto-Tune – really, man?), and seems out of place in the scope of the album. Hip-hop lyric stylings on “Way Too Fast” don’t entirely work either, and are a bit awkward when Grossi sings, “You know/ H’oh you’re so damn hot/ Soon you’ll be on fire,” and “I trusted you/ Way too fast/ Didn’t think you’d do me like that.” However, the poppiness of tracks like “High Priestess” and “You Are All I See” are undeniably good, rescuing the album with their hooky choruses and beautifully detailed harmonies.

You Are All I See is an album informed by Pat Grossi’s varied musical background, and creates a downright hypnotic atmosphere. With it, Grossi has attempted to create a republic of sounds, composed of styles and musical philosophies that seems to somehow both contain and wholly exist outside of the borders of modern musical genres. However, after 41 minutes of thickly produced, ethereal music, the plot kind of gets lost in the mist. Either way, it hardly seems fair to criticize Grossi for the bold attempt, despite some of You Are All I See’s stylistic misadventures. This is still a very decent album to get lost within.

Key Tracks: You Are All I See, High Priestess, Hanging On