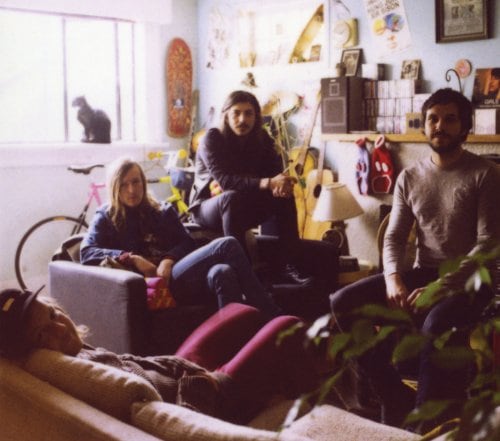 4th Avenue is not a hip neighborhood in Vancouver. It’s the antithesis of hip actually; overgrown with yuppies, expensive baby shops and yoga boutiques. It is, however, right by two of the city’s post popular beaches, which seem to have an equal draw of Lulu Lemon MILFS and dudes with fake tans and shitty tribal tattoos (their natural predators). It’s interesting then that a contingency of musicians can sustain themselves there in the decidedly un-chill environs, as if eking it out on a small island of creativity that’s wholly sustained by fumes from the local record shop. Somehow that’s where Sun Wizard has managed to thrive. With earthy grooves and a strong sense for their sound, they’re a band that exists at the flashpoint between rootsy soulfulness and a compressed but unconfined energy.

With Positively 4th Avenue, the foursome coalesce these traits into a debut album that’s full of as many folksy charms as it is big riffs. The album swims with ease and confidence. Many tracks sit well back in the groove, basking in the sun like summertime jams, summoning Garcia goodness and a well-traveled wholesomeness that seems not entirely innocent.

The album is evenly divided between straightforward driving tunes, like “Sick of Waiting,” that feel raucous and Springsteen-infused with a healthy dose of sunshine, and deliberate honky-tonk tunes like “Too Much on Your Mind.” Sun Wizard tastefully balances these sounds with harmonies and sparkling guitars that are cleverly placed but never too obvious.

All of these elements are equally apparent on “Middle of My Heart,” which is undoubtedly one of the best songs I’ve heard this summer, irresistible with its syncopated breaks and subtle variations on the chorus. On it, and other tracks like “Little Less in Control”, guitarists/singers Malcolm Jack and James Younger have a quality of restraint to their vocal attacks that push their parts to just the right pitch before subsiding.

Overall, Positively 4th Avenue is pretty well paced, and Sun Wizard pays close attention to how it flows from song to song. Despite this, some of the more straight-ahead rockers rely a bit too much on the strength of a chorus, and the dynamic between these tracks and the more down-tempo folksy tunes can be very obvious at times. The band tries to manage this by changing gears in sequence between strong and soft, but unfortunately, as a result the in-between songs like “Golden Girl” can get a bit lost in the mix.

With all of its mountainous topography, Sun Wizard ends the album with a whisper. The closing song “Buildings” floats along well enough on its own, though the breakdown is one of the best moments on 4th Avenue. Picking itself back up, Jack and Younger trade the refrain “Where do you go/ Where do you go at night, honey?,” shifting beautifully into a final buildup that reaches just the right peak before grooving off into the sweet, ocean-kissed air.

Positively 4th Avenue drives as much as it drifts, and the album always keeps a sense of peaceful recollection of a great day spent adventuring the beaches in the part of town where the babes and bros keep a delicate body-hairless ecosystem. Sun Wizard is as much a response to its environment as its by-product, squeezing out the area’s authentic charms by keeping true to its sense of untroubled optimism.

Key Tracks: Middle of My Heart, World’s Got a Handle, Too Much on Your Mind