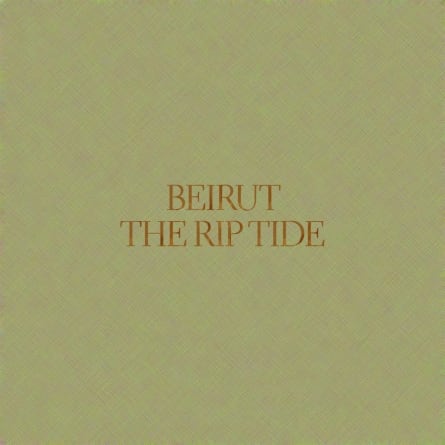 Zach Condon, New Mexico’s most itinerant frontman, seems to finally have settled down, not just in body (he’s now a homeowner in New York City) but also mind. His creative journey was always a nomadic reflection of his travels, resulting in some of the most idiosyncratic hybrids in recent pop history. Here we find Condon and Beirut in their most stable form to date, stemming from the ironic way The Rip Tide simultaneously departs from and reverts to Condon’s early work. Condon has streamlined classic Beirut instrumentation into a traditional culmination of everything his music has sallied towards. The self-defining frills of his music – a worldly flair, analog electronic textures, cultural cross-sectioning – exist only in the subtle moments allowed in the classically-styled arrangements.

So, it’s not surprising that that we hear a stultified and undecidedly lonely Condon. “East Harlem” and the title track speak of the inconvenient grandiosity of his new urban home. “Vagabond” is his most sentimental poem, and he sounds lonelier than ever now that the world isn’t moving so fast under his feet. This motif musically echoes in the relative plateau that The Ripe Tide strolls across. It’s a stark departure from 2009’s double EP, March of the Zapotec/Realpeople Holland, which offered extremely contrasting songwriting personalities and some of the most disparately exotic music from Beirut to date. But as each EP sat on opposite ends of the band’s own spectrum, The Rip Tide finds Beirut hardly attempting to wiggle out of the poppy, dead center – a perfect metaphor for Condon’s own inert situation.

For a relative newcomer to the Big Apple, Condon directs The Rip Tide with quite the urban panache. His ukulele, once Beirut’s prime commander, is sadly shoveled under copious pianos and horns along with the band’s former foreign zing. “The Vagabond” shuffles and waltzes like a Tom Jones song, its declarative horns and somber harmonies eventually mingling with playful accordions in a zealous, showy fashion. “Goshen” capitalizes on simple, Top 40-friendly piano chords that glides over a military drumbeat. Song after song, signature Latin, European and gypsy infusions are nowhere to be found. Consider this Beirut’s first truly American record – it’s fun, it’s stagy, it’s polished, but perhaps it’s a little too obvious.

Half of the joy of the Beirut experience was to watch them meander into unexpected directions and introduce the uninitiated to new genres from around the world. You won’t get that here, and if they stay on this course, as Condon seems to indicate in his lyrics, we may never get that again. But it’s still Beirut. Their aura remains in a league of its own, and Condon’s brazen voice remains unmatched, a testament confirmed in the utterly gorgeous organ piece, “The Peacock.” There may not be anything as adventurous or rewarding as “Bratislava,” “Postcards From Italy” or “My Wife, Lost in the Wild,” but they seem perfectly content with keeping a steady beat.