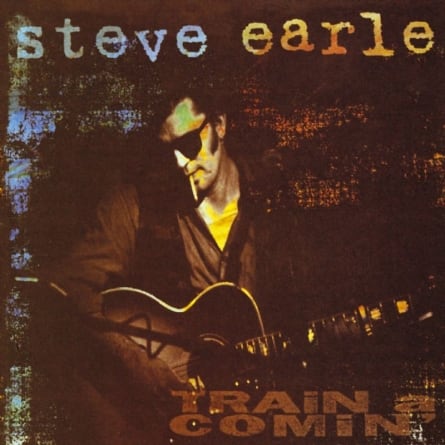 In the few years preceding the release of Train a Comin’, Steve Earle’s life was pretty much in the gutter. His heroin addiction continued to worsen, resulting in him essentially shutting his act down for a couple years, with nary a performance or recording to be had. Soon after he’d briefly end up in the slammer on weapons and drug charges; his emulation of Townes Van Zandt extended far beyond the Texan’s music. So, it came as a pleasant surprise when Train a Comin’ – recorded in a newfound state of sobriety – wasn’t a complete disaster. Instead, it was critically praised as Earle’s best up to that point, even if the depths to which Earle had sunk may have influenced some reviewers to depict it as the inevitable, and life re-affirming, “comeback” album.

Fifteen years later, it is rightly considered by many to be the definitive album Earle recorded in his most personally tumultuous decade, though in retrospect its somewhat odd mix of originals and cover songs don’t always flow well together. Indeed, at least some of these cover versions drag the album down and could be dismissed as curiosity pieces without much of an argument from even Earle’s most ardent supporters. The Lennon/McCartney composition “I’m Looking Through You” is reworked into a goofy quasi-bluegrass tune with an exaggerated twangy guitar line – no wonder some versions of the album issued on Earle’s own label omit the song. “Rivers of Babylon” likewise isn’t entirely convincing – it’s unable to bridge the cultural and social gaps between the interpreter and the original artists – though Emmylou Harris does her damnedest to make her background vocals count for something. A couple covers are brilliant though: the interpretations of Norman Blake’s “Northern Winds” and Van Zandt’s “Tecumseh Valley” – a wrenching story-song about a miner’s daughter (of course) from a podunk town who takes to whoring after her father dies and eventually kicks it herself – are more suited to Earle’s style.

As curious or as charming as they may be, these covers pale in comparison to Earle’s own material on Train, all of which is acoustic and most of which splits evenly between regret-tinged love songs and historically-influenced tales of war and violence. For all his gruffness and rough edges, Earle has always been capable of writing tender songs like a true balladeer, a fact sometimes overlooked when critics evaluate his albums and one that is well represented here. “Sometimes She Forgets” and “Goodbye” are thematically different, but both cut from the same melancholic cloth. The former brings to mind a vivid image of a lonely girl – probably one with daddy issues – boozing it up in some dingy roadside dive bar, while in the latter Earle makes passing mention to possibly his own drug use as its narrator ruefully stews over his past fuck-ups.

One of Earle’s greatest traits has long been his ability to evoke specific locales and characters from the past with a large degree of authenticity, and it’s in this geography where Train a Comin’s real masterpieces can be found. The outlaw drama detailed in “Tom Ames’ Prayer” at least partially unfolds in an unnamed border town, while “Mercenary Song” chronicles the travels of a couple Georgia-born soldiers of fortune as it makes mention of Durango, New Mexico, Chile and Mexico. The subject of war is portrayed far differently in “Ben McCulloch;” set in the early days of the Civil War and named after an ardent pro-secessionist, the song chronologically follows two brothers’ experiences in the Texas infantry. The bonds of brotherhood that appear throughout the album surface here again, as one brother is killed at Wilson’s Creek and the other grows disillusioned with the Confederate cause, deserts and damns the general for good measure. Though Earle takes some artistic liberties – McCulloch allegedly disagreed with his superior’s orders to attack St. Louis – the song ranks as one of Earle’s finest lyrical moments and one of the most effective war-themed songs of the decade. That all three of these songs were written when Earle was barely out of his teens is equally remarkable.

Channeling his inner Costello, Earle would later complain about the record label’s release of Train a Comin’, claiming that the label altered its intended running order. Modern technology – as well as “corrected” versions of the album – makes that a moot point, but the album would be effective with any track order. Earle’s mainstream profile would eventually increase thanks to the hysteria that ensued after the controversial “John Walker’s Blues,” but had more people been paying attention in 1995, Train a Comin’ would have broke the musician to a wider audience. It’s always been puzzling how some listeners and critics absolutely despise Earle’s music almost to the point of fanaticism; if this album doesn’t convince them of the man’s skills as a musician and especially as a writer, it’s likely that nothing will.