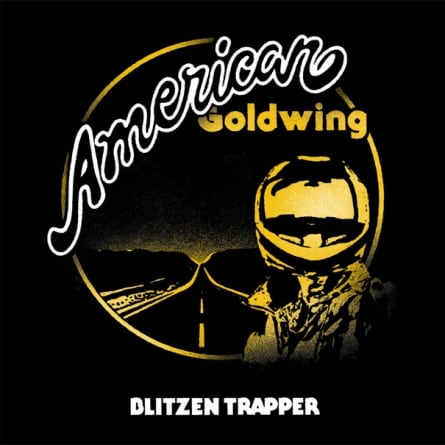 One thing you can say for Blitzen Trapper, they’re hard workers. Since signing with Sub Pop in 2008, they seem to have steadfastly pumped out psychedelia-tinged, rootsy rock music without fail. Their sixth and newest record, American Goldwing, is their most overtly Americana inspired album, as resolutely steeped in the sounds of ’70s country rock as their previous records were eclectic. While their single minded approach to the sound of the album is admirable (and certainly successful in its imitation), it does come off as a bit of a let down after the one-two punch of Furr and Destroyer of the Void.

To say that American Goldwing hearkens back to the earthy, country sounds of Neil Young and Tom Petty in the 1970s is a bit like saying that paintings usually are made up of paint. The album isn’t quite a pastiche of the harmonica and pedal steel albums of yore, but is so heavily indebted to them as to sound somewhere between a love letter and a carefully plotted reminiscence. Singer Eric Earley and the rest of the band are clearly enamored of the sound and have never been shy about it; previous songs like “Black River Killer” from Furr hinted at the twangy mood of the new album, but they’ve rarely been as heavy as they are on American Goldwing.

The album opens with “Might Find It Cheap,” a burst of fuzzy guitar that almost brings “A Hard Day’s Night” to mind kicks in until a bouncy bassline takes over. It’s a quick bait and switch, and shades of Lynyrd Skynyrd and Southern rock dominate the rest of the record. The following track “Fletcher” allows a squall of guitar noise before Earley comes in with a lyric that defines the record: “Oh mama, I’ve been dreaming of those Western stars.” His youthful voice doesn’t have quite the roughness of Ronnie Van Zant or the haunting reediness of Neil Young, but like the rest of the band, he seems so immersed in the songs that it carries. “Love the Way You Walk Away,” one of the highlights of the album, marries pedal steel and an understated banjo to a plaintive tale of a man caught between vices and love, the chorus, “Baby I’m on the make/ In my ole sport coat/ And my head it aches/ I’m lettin’ you down tonight and it ain’t right,” perfectly underscoring the ache of disappointment. Another high point of the album, “Astronaut,” is overtly reminiscent of their beautiful “Not Your Lover” from Furr; a delicate piano melody supporting some of Earley’s most emotive singing, though with a more muscular chorus.

American Goldwing’s greatest strength is unfortunately its major hindrance as well. Blitzen Trapper have rarely sounded so focused and devoted to a single musical atmosphere as they do here, which speaks to both their love of the period they faithfully recreate, but also means they somewhat abandon the wandering voice that often makes their records so fascinating. As an album, it’s solidly satisfying (if sometimes a bit repetitious in its basic elements), but hopefully the band isn’t headed to a destiny as a Lynyrd Skynyrd tribute band.