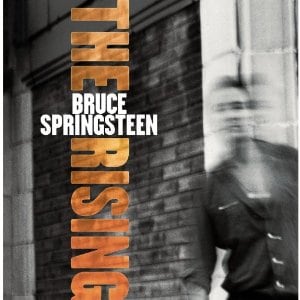 As the legend goes, shortly after 9/11, Bruce Springsteen was stopped by a stranger in a nearby car who told him that “we need you now,” inspiring the King of New Jersey to write an album that reflected upon what happened on that Tuesday in September. It’s a pity that mystery man with the amazing sense of poetic gravitas has never stepped forward. Whether it’s true or not is completely irrelevant by now; unarguably it has all the hallmarks of the type of barely-believable, myth-making stories that have long been part of the musician’s image.

But to call the album a focused, self-contained reaction to 9/11 is inaccurate. Several songs were written well before September 2001: “Waitin’ on a Sunny Day” and “Nothing Man” date from the mid-1990s and possibly even earlier, while “Further On (Up the Road)” was refined enough to be part of Springsteen’s shows throughout 2000. With its references to “a blood red circle/ On the cold dark ground,” “My City of Ruins” is frequently cited as a 9/11 song, but is actually another tragic evocation of Springsteen’s hometown; an emotional live TV performance of the song shortly after 9/11 has permanently altered how it’s interpreted.

Though it can’t be considered a true concept album, The Rising remains relevant, and intensely moving, for how Springsteen focuses on the personal toll 9/11 exacted. The musician’s well-known political proselytizing would surface later throughout the disastrous Bush-Cheney era, but with The Rising, he rightly avoids social commentary, instead placing 9/11 in the context of how it affected us as individuals. It’s in these pictures of loss where Springsteen again shows himself to be an astute and deeply compassionate observer of how we both cope with death and remember the dead. In this way, in songs like “Empty Sky” and “You’re Missing,” the musician focuses on specific, primarily domestic, details: “an empty impression” on a bed; a home filled with middle class accoutrements; young children questioning a person’s absence.

“Into the Fire” still stands as the album’s most overt statement about 9/11; it’s also the album’s most harrowing song. It opens with lyrics that force the listener to recall some of that day’s most haunting moments – “The sky was falling and streaked with blood/ I heard you calling me/ Then you disappeared into the dust” – before Springsteen offers a tribute to the first responders who lost their lives by charging into the Twin Towers. No characters’ names are mentioned and only cursory biographical details are provided, an approach that actually heightens the song’s emotional qualities. Its very lack of specificity is what makes it believable, as does Springsteen’s popular depiction as a working class, grizzled blue collar everyman; such songs likely wouldn’t be as believable coming from a younger artist.

Aside from these songs, however, the album’s cohesiveness is deadened by a series of typically-Springsteen love songs. These songs’ relationship to 9/11 seem tangential at best – maybe one can find something of American defiance and optimism in the title song – and a decade later feel like throwaways. On “Countin’ on a Miracle,” “Worlds Apart,” “The Fuse” and “Let’s Be Friends (Skin to Skin),” Springsteen insulates himself so tightly in small-scale relationship turmoil that these tracks feel inconsequential when compared to the album’s far graver songs. Indeed, these tracks probably could have been omitted – or maybe saved for another record – and the album as a whole may have been better for it.

We are now 10 years removed from this American century’s defining event. It’s been said that “9/11 changed everything,” a statement that would be used as justification for a thuggish regime’s actions, lampooned in Seth MacFarlane cartoons and generally serve as the final word in cutting off any chance of civil political discussion. All cynicism aside, that statement does point to how difficult it is to put what happened here in a proper historical, cultural and personal context. In this light, the fact that The Rising partially failed as a 9/11 concept album isn’t surprising; Springsteen’s real achievement is that he was able to take events that still defy words and express something of how we felt as both Americans and individuals. That he was able to do this via simple rock songs is equally impressive; in some ways a line like, “I got dust on my shoes/ Nothing but teardrops” speaks to the personal impacts of 9/11 as much as any historian, politician or poet ever could.