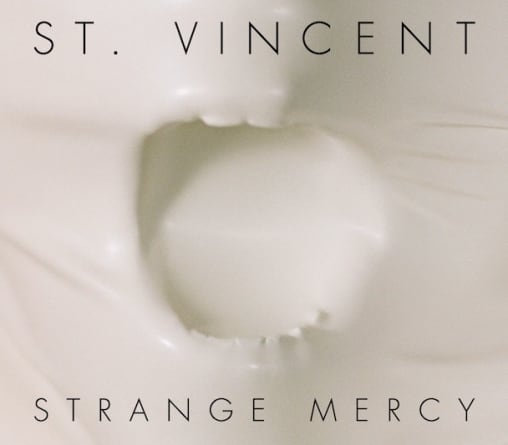 Annie Clark’s St. Vincent project represents her unwillingness to stand on a stage spewing her energy outwards from the confines of a specific style. Instead, on Strange Mercy she sings, “I don’t wanna be a cheerleader no more.” That seems to speak a central truth about her music, which can only be understood as eclectic and brilliantly creative. The music on her third LP as St. Vincent sees Clark press herself not in new directions, but rather into new forms.

As with 2009’s Actor, St. Vincent presents an amalgamation of discordant styles that somehow results in a milieu of complementary sounds. On Strange Mercy, this comes together within a culture of stylistic ventures that reaches arching emotional highs, hitting touchstones of jangly rock, Italian disco and ’80s synth-pop along the way. Using equal parts electronic noise, synthesized melodies, fuzzy guitars and programmed beats to accent her delicate voice, Clark creates dark and reflective (but not brooding) music that floats like dandelions in a breeze, or moves like it’s running under water.

Album opener “Chloe in the Afternoon,” is full of weird breakdowns and spazzy guitars that teeter on the edge of experimental jazz. Elsewhere, poppy hooks are dropped at choice moments on songs such as “Cruel” and “Surgeon,” giving Strange Mercy an almost danceable quality. But the album remains grounded by lines such as, “Forgive the kids/ For they don’t know how to live/ Run the alleys casually/ Cruel,” giving it layers of depth beyond the already dense strata of sound.

This quality of literary complexity is in fact what really makes Strange Mercy an enjoyable, if not excellent, album. While St. Vincent’s previous releases are pregnant with graceful writing that feels propelled upon you by Clark’s supple voice, here she dances with the rhythm, striking a pitch-perfect balance between the incredibly visceral and the delightfully dreamy. At times, it’s even as if she isn’t singing as much as the words are simply happening in the air.

If Strange Mercy has a weakness, it’s the album’s overall tone, which rarely shifts from start to finish. Despite Clark’s interesting musical ideas and the fact that her approach is never redundant, Strange Mercy’s flow is highly viscous and, as a result, lacks enough dynamics in the tempo department. Still, fantastic songwriting is at the heart of every moment, and when Clark sings, “I’ll be with you lost boys/ Sneaking out where the shivers won’t find you,” it’s easy to become utterly transfixed by her spell.

Strange Mercy has ambiance that’s thick with feeling, yet somehow retains a breezy quality that preserves the clarity of Clark’s ideas. The style that’s become a central character of St. Vincent is entirely Clark’s own. On Strange Mercy, her talents have all the room to breathe that they need, as she moves along, lazily navigating the haze with a sparkling clear voice.