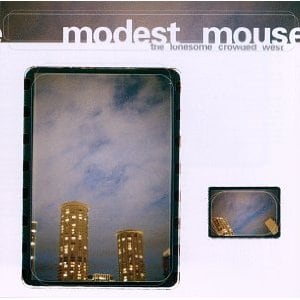 Isaac Brock doesn’t believe in sophomore slumps. The talented-as-he-is-troubled frontman of Issaquah, WA’s Modest Mouse has had a storied history of substance and domestic abuse problems, but that guy can write a fucking song like no one’s business. Their 1996 full-length debut This is a Long Drive for Someone With Nothing to Think About is a spacey, atmospheric record with such memorably depressing songs as “Dramamine,” but it suffers from being overly long, possibly to echo the sentiment of the title. Still, it shows a glimmer – a glimmer that Brock would soon bring to bear with The Lonesome Crowded West, their second and best album to date.

Opener “Teeth Like God’s Shoeshine” immediately grabs the ears with a vicious guitar line and Brock’s tortured singing. One of Modest Mouse’s (and this album’s) biggest strengths is the versatility of Brock’s nontraditional singing. He strangles every syllable, he’s not afraid to slur or smooth a word to fit his cadence and he has a remarkable ability to switch vocal patterns immediately. On this track he goes from frantic wailing to slowing his singing to a drawl as his guitar does too, even managing a surprising tenderness. As he sings, “The malls are the soon-to-be ghost towns/ So long, farewell, goodbye,” there is a quiet sense of concern – a genuine moment of feeling permeating all the anger and the frustration. And that’s just the first song on the album.

Brock’s creativity tends to spark in surprising ways – the one uplifting song Modest Mouse did after years of frosty, beautiful odes to sadness ended up becoming the hit they needed to break through into the mainstream, and it’s not even their best song from their best album. That distinction might go to at least five songs on West, including the deceptively upbeat “Jesus Christ Was an Only Child,” but Brock’s full force is unleashed on album closer “Styrofoam Boots/It’s All Nice on Ice, Alright.” Brock is a supernaturally talented lyricist, able to string words together with a staggeringly complex cadence and craft immersive stories out of mere sentences in a stanza – a difficult task to accomplish for even the most straightforward songwriter. He engenders thoughts and statements that are mentally stimulating and exciting without appearing ponderous; he’s a man who finds the beauty in the dirt and can say so without using the words. He describes a nondescript man entering a bar as, “Some guy comes in/ Looks a bit like everyone I ever seen,” which is a pretty brilliant and evocative way of saying that the man was not memorable at all.

Throughout West, the band seems to be at odds with faith. There’s an overlying theme of God as a shyster and a vengeful type. “Cowboy Dan” might be the most hateful song ever written, with Brock’s tale of a drunken modern cowboy quarreling with the Lord featuring thunderous percussion from Jeremiah Green and Eric Judy. It’s pure harsh Leone vistas with cloudy Anthony Mann skies, all mentally rendered perfectly by discordant, viciously jangly guitars and a menacing tambourine line that evokes rattlesnakes and thunder and desert fires crackling. When Brock sings, “God, if I have to die/ You will have to die,” it feels less like the character and more like Brock himself coming to terms with this qualification. The constant, ever-angering cry of “Can’t do it/ Not even if sober” also speaks volumes, and in 1997 foretold Brock’s substance problems even if he did not intend to, which is one of the downsides to being such an expressive lyricist. Even the aforementioned “Styrofoam Boots” features Brock singing about drowning upside down while his feet “float like Christ.” “Shit Luck” starts with his bloody caterwaul singing about disasters occurring, and even then, as the title suggests, he’s more inclined to blame God than the failure of man-made technology. Brock has come out as an atheist, several times implicating Christianity as “a crock of shit,” but he seems to be fascinated by the appeal it has worldwide. One might guess he treats tomes like the Bible strictly in a literary sense, and from these themes and stories he can relate the necessity to apply meaning to one’s life and works.

Eclipsing 2007’s decidedly slicker but ultimately wonderful We Were Dead Before the Ship Even Sank, The Lonesome Crowded West is a haunting, thoroughly satisfying and stirring pinnacle of indie rock. Brock and crew have created a testament to themselves by recording an album about finding solace inside of the solitude. It’s an album that reaches heights as gorgeous and desolate as the Westin Hotel that adorns the album’s cover. Despite Brock’s personal issues, The Lonesome Crowded West is a piece of musical artwork that has not had one note lose power or significance in its almost 15 years. It’s a widescreen cityscape of hope and despair, growing brighter and larger for years to come. Have a little faith in the man, even if he doesn’t.