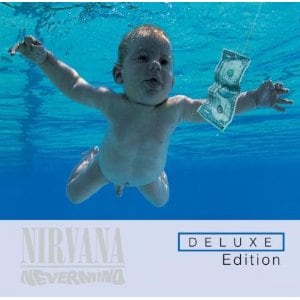 There is very little new that can be said about Nevermind. In the 20 years – an expanse of time that likely makes more than a few of us feel very, very old and very, very nostalgic – since its release in 1991, it’s been evaluated, discussed and dissected from every possible angle. In the days leading up to this year’s anniversary reissue you’ll still hear a lot more philosophizing and alternately tragic and amusing anecdotes, probably apocryphal, about the band’s first Geffen release. And all the while, most former flannel-wearing grunge fanatics will simply sit back and wonder what might have been had the band’s most visible member been able to keep his shit together.

This year’s reissue is available in an ungodly number of configurations (single disc, two-disc, four-disc/one DVD, vinyl) designed to appeal to Nirvana fans in every income bracket, but is another purchase of Nevermind warranted? The single disc lightweight is the runt of the litter and is essentially a stocking stuffer ahead of the holidays. The double and four-disc packages are where the real substance is, and both offer a compelling and comprehensive snapshot of the band at a specific point in their career. Though major labels have had a tendency to dole out previously unavailable material in a miserly fashion, both of these versions offer a decent amount of goods that haven’t been officially released. The two-disc set is more to the point and worth the price tag: its pre-Nevermind Smart Studio demos as well as the lo-fi boombox rehearsals – which show the band beating a few of the album songs into shape, sort of – are intriguing and perhaps the most enjoyable of the entire set. A pair of obligatory BBC recordings are tacked on to the end of the disc, but are rote performances and tend to feel like afterthoughts after the almost-revelatory demo and rehearsal songs.

The four-disc/one-DVD whopper will separate the mere enthusiasts from the completists. The Butch Vig Devonshire mix on disc 3 offers an opportunity to hear the album in a different light and makes one wonder if the album would have blown up the way it did had this mix been chosen instead of the more polished Andy Wallace mix. Whichever mix is “superior” is simply a matter of personal taste; endless debates aside, it’s nice to have the Vig mix all in one place, as previously only “Breed” appeared on the With the Lights Out box set. It’s impossible to squabble about the 1991 Paramount Theater Halloween show that makes up disc 4 as well as the bulk of the DVD either; generally recognized as one of the band’s best live shows from the Nevermind era, the audio is rendered in beautiful clarity, a sonic notch above boots like Into the Black and Trick or Treat.

There are some minor, though perplexing, oddities, but nothing that detracts from the set too terribly much. Several of the Paramount Theater tracks appear on both discs 1 and 4, which might come across as a bit shoddy and careless to those who spring for the four-disc/one DVD version, and already some people are grumbling on message boards about other demos or outtakes that were excluded. These points are valid but a bit curmudgeonly; overall this anniversary campaign does right by the band and should satisfy most listeners.

Kurt Cobain would eventually distance himself from what he considered the album’s overtly radio-friendly sheen – he’d voice a similar complaint about In Utero – but even that gripe points to a somewhat uncomfortable truth about Nevermind: how it’s been perceived and remembered in the intervening 20 years now far outweighs its actual content. In this sense the fact that it isn’t even Nirvana’s best studio album is less relevant that the mythology that surrounds it. That Nevermind changed the musical landscape of the 1990s – for better and worse – is of course true. It’s also a facile statement that forgoes any serious appreciation of its actual songs, and now isn’t the time to try to dispel the nonsense that the album marked an indie-based victory for “us” over “them” (if you feel otherwise, just ask yourself if the album would have had such a mainstream impact had it been released on Sub Pop).

If this reissue succeeds in anything, it’s that it attempts to emphasize the album’s building blocks and final form over its massive, and massively misremembered, legacy, and for this reason alone it comes highly recommended for Nirvana fans of all stripes.