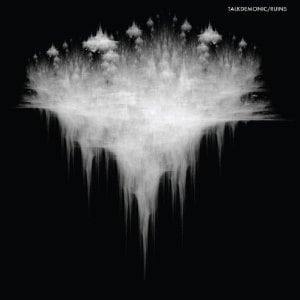 For a band named Talkdemonic, you won’t find much in the way of vocals or malevolence. Sure, their fourth album Ruins (released by Modest Mouse frontman Isaac Brock’s label) at times exudes foreboding tones – especially on their more heavily distorted tracks – but with a transcendent blend of viola, percussion, and all manner of electronic gadgetry, Portland duo Kevin O’Connor and Lisa Molinaro spend more time channeling the sublime.

Talkdemonic’s first album Mutinysunshine manifested in 2004 and, following its release, O’Connor toured solo. Contributing violist Molinaro (who has also contributed to the Decemberists) permanently joined the endeavor shortly thereafter, a uniting of forces ultimately named “Portland’s Best New Band 2005” by the city’s weekly paper. In Ruins, gone are the folksier elements of their previous releases, a subgenre O’Connor himself clumsily dubbed “folktronic hop.” This latest effort amps up the electronic elements, with Molinaro’s masterful viola more often straying to an industrial sound than to anything overtly rootsy.

The album begins with “Slumber Verses,” employing stark stereophonic sound at its inception that serves as an example of why Ruins is best explored through headphones. But as the track progresses, the mournful viola gives itself over to distortion and the song ventures into a sonic space too crowded for its own good. The same can be said for the second and titular track. Spastic bursts of competing thumps and clatters flare up in “Ruins” and are only somewhat diverted by the beacon of the viola from what could be described as “noise.”

Based on the first two tracks alone, Ruins may seem like the unremarkable instrumental tinkering common in indie music today, an album perhaps forged out of experimentation, a concept still inchoate. And then Talkdemonic slathers on the aural salve of “Revival,” beginning as it does with a tender acoustic guitar riff that drops into rolling drums and evocative viola intonations. The music emotes in a way that leaves no room for human voice, a swelling urgency that speaks in a language transcending locution. The song climaxes twice, with an ecstatic waterspout of cymbals, electronic blips, and steady strings that conjure joy.

With a peppy keyboard and e-drum melody (not unlike the Postal Service) leading us into “Midcentury Motion,” once again Molinaro leads the charge as the song billows out into an expansive symphonic space. By the time we reach “City Sleep” the distortion returns but in proper measure and backed by percussion like a heart’s arrhythmia while one stands at a cliff’s edge. “Summer Glass” drops like a pebble through the sea, settling into the depths of a palatial sound that slows the tempo and works as an effective complement to “Cascading,” its soothing collection of keys furthering the descent as though sliding down an icy slope.

“Midnight Pass” jars the somnambulant tone awake before injecting catchy percussion and synth that works into a groove. But especially early on, this track comes off too frenzied and Requiem for a Dream-like for its own good. And there’s the rub with this band: their propensity toward cacophony detracts. But when Talkdemonic achieves controlled distortion alongside warbling background strings, they become capable of wordless language, complete with its own cadences.

O’Connor and Molinaro prove they’ve got more tricks up their sleeves than pairing strings with synth. Their albums are tastier when ingested whole rather than in parts, and are especially effective behind closed eyelids. Ruins kisses the sky and deep sea dives, creating and then occupying a boundless expanse with its immersive sound. In doing so, it expresses the indescribable in ways words never could.