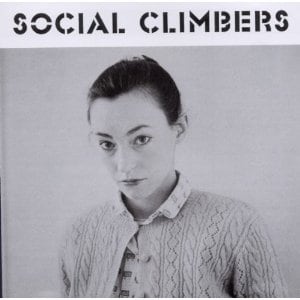 Social Climbers don’t have an entry on Wikipedia. Google “Social Climbers” and you’ll get results about upward economic mobility, scaling either the corporate ladder or mountains, or an unrelated book of the same name. Try the band’s moniker on YouTube and you’re treated to videos of Jennifer Love Hewitt smoking. You’ll find nary a mention of the group in the majority of music histories documenting the period in which they were active. Such is the sad fate of a group who created a trio of stellar 7” records rooted in equal parts No Wave and highfalutin’ art rock but was never considered more than a blip in early 1980s New York post-punk, if even that.

Formed in 1979 by Mark Bingham (vocals/guitar), Don Connette (organ), Jean Seton Shaw (bass/vocals) and a drum machine, Social Climbers never reaped the benefits that working in NYC’s varied avant-garde cultural scene afforded other acts. They recorded sporadically and their shelf life was short; originally released in 1981 by Gulcher Records as a triple 7″, Social Climbers represents just about everything of consequence the trio did. Even the modest, regional following that contemporaries like the Contortions or DNA achieved never materialized for Social Climbers; a tour followed to little fanfare before the group disbanded in 1982. Now re-released by Drag City with two inconsequential live bonus tracks, the album has aged remarkably well, and this latest pressing might finally grant the band a degree of attention it never received during its lifetime.

Listening to the album now feels like rummaging around inside the brain of an increasingly perturbed but highly eloquent literati. That twitchy individual is Bingham, a Bloomington, Indiana native and one-time songwriter for Elektra who would also do time in one of Glenn Branca’s ensembles. Combined with keyboards, rhythm box, layers of bass and that omnipresent drum machine, his vocals make these songs distinctive even when compared to the era’s rich variety of underground music. “Domestic” remains the band’s most angular and aggressive song, its instrumentation stabbing and punching its way through as Bingham yells and yelps about a woman’s mundane daily life, her forgotten younger years, the accoutrements of middle class life and commercialism in general, ending with repeated shouts to “sell it!.” The tracks that follow at least match the quality of “Domestic.” Beyond Bingham’s neurotic vocals and bizarre references to everything from oak trees to hot lunches, pickup trucks and a farmer’s family eating pork chops, “Chicken 80” is the most disco-influenced song the band recorded. “Western World” is dizzying and vast, an organ-driven track with abrupt instrumental changes and a rambling internal monologue that includes Miss Kitty from “Gunsmoke,” childhood memories, various world cities and long-lost friends.

Aside from the respite offered by the mellower, sans-vocals “Palm Springs” and “Ernie K,” the record’s tone is broadly agitated. “Chris & Debbie” serves up six minutes of sordidness, its canvas populated by a shady European photographer with a pencil-thin mustache taking lurid pictures of a woman and an adolescent flipping through a skin mag and unable to focus on his schoolwork. Bingham alternates between falsetto and spoken word on the like-minded and extremely jerky “That’s Why,” his exclamation of “I feel so barbaric!” sounding like a primitive, lust-filled celebration of base desires. “Hello Texas” and “Taipei” move in wildly opposite directions and show at least a subtle evolution in the band’s style: Bingham adopts a country twang befitting its namesake city on the former, while Shaw sings in a theatrically operatic voice and Bingham brusquely grunts in the background on the latter.

But for a twist of fate here or there, Social Climbers could have been held in the same esteem as their peers who landed in the history books and influenced post-punk’s next generation. Instead, a brief recording career and sporadic distribution of their output contributed to the band’s relegation to the obscure and unknown. Yet the group’s brand of nervous music and lyrics that blended the banal with the philosophical should find plenty of eager adherents 30 years later. Social Climbers had a small body of work, but it’s a very good one, and one that deserves an opportunity to be heard by a wider audience, even if it’s decades later than it should have been.