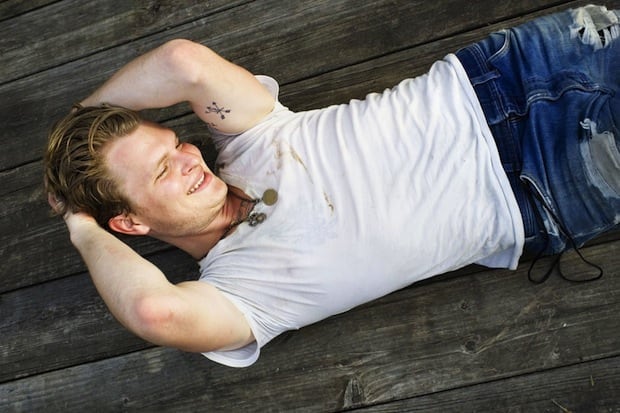 The Doug Fir’s floor was fairly empty in the interim before CANT, alias Grizzly Bear multi-instrumentalist and producer Chris Taylor, made his appearance onstage, throngs rushing to get drink orders in before the headliner. Everyone else, under pressure to overcome the awkwardness of choosing to stand around, was chatty and charged with restless energy. A few minutes past 11, those left behind began inching forward, and the pit started filling in. Taylor came in on bass in a crisp black blazer along with CANT’s tour iteration of guitarist, drummer and keyboardist. With a Jack Nicholson smirk, Taylor informed the audience his place of origin (“from Brooklyn”) and led his backing players into a soul-searchingly honest but ultimately underwhelming revisit of material from the recent Dreams Come True.

Playing basically everything off his solo debut, Taylor–and his backing band’s–acumen was apparent, but so was his relative newness with this side of the art. (Upon being recalled for an encore, Taylor struggled to think of a tune, admitting “We’ve played everything but track number five”–a minute-long interstitial.) Album standout “Believe” got good treatment, turned into a belabored dream of wandering, gritty bass lines and synth flourishes, its subdued sound a good fit for the Doug Fir’s finicky system as Taylor crooned, “Things I haven’t shown you, you won’t believe.” In spite of the direct (oftentimes overly direct) lyrics of this and other CANT tracks, the song spun along unabated in the standard bedroom rock vein, albeit informed by Taylor’s producing experience. Follow up slow-builder “Bang” unfolded in electronic doodling, heavy-lidded pulling tones and keyboard phrases, making room for noise to encroach as it moves to the drummer’s time. Taylor cradled the microphone again as he noodled on the bass, “It’s a game inside your head and no one wins.”

Showings without as much flair included a rendition of “The Edge,” a clear grasp at Neon Indian-style fusion, sopping wet at first and later red-hot in the album version, delivered limply that night. In spite of a sticky, greasy back half that reaches for the smoothness of the xx but can’t quite muster its punch, the track’s flat layering and conflicting elements were rendered muddy live. In fact, “muddled” describes a good portion of the performance from CANT, and Taylor may be struggling with how to communicate his studio skills to the stage. Distorted vocal turns that ring monstrous on the album came out inaudible onstage; autonomous elements with breathing room on the record translated to foggy, blended sonic landscapes with too few distinguishing features save for the occasional flourish, clever turn or the evident pause between songs. Taylor could at times rise above the noise, but his presence was not commanding enough, nor did the tracks themselves allow for adaptation.

Either bouncing with chillwave beats and an R.E.M.-esque FM radio ambiance, or slowly morphing into sluggish, dreamy juggernauts, the tracks on CANT’s debut are more pieces of a blurry if highly personal mosaic than self-contained icons, to arguable effect. The end result was a genuine and flawed work, but the success of live delivery is always in what performance injects into a tune. In that respect, CANT’s Doug Fir show was what Dreams Come True was: with promise and polish, but perhaps too glacial for its own well-being.