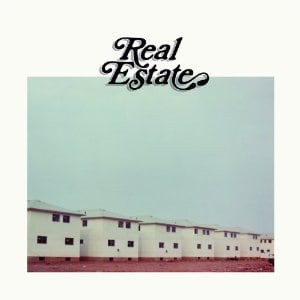 I despise the beach. I hate the sensation of scalding sand between my toes. I dislike the salty, seaweed-inflected odor that stays with me for days after leaving the sandy shore. Exposure to unadulterated sunlight makes me sneeze. Thus, it takes a small miracle for me to willingly listen to and enjoy a beach-combing, surf-pop inspired record in the dead of autumn. With their sophomore effort Days, New Jersey’s Real Estate have accomplished this unlikely feat.

The band makes it clear from the first beat of “Easy,” the record’s opening track, that they have cleaned up their sonic act since their 2009 self-titled debut. Frontman Martin Courtney and company became known for their brand of dreamy, lo-fi meditations on the simultaneous foibles and pleasures of American suburbia following that first LP. While the DIY aesthetic of their eponymous debut had its own charms, the cleaner, slightly more polished sound brings the group’s musicianship and songwriting abilities to the fore on this follow-up effort. The guidance of producer Kevin McMahon lends the record a brighter sheen. Many of the songs from Days have additional layers of musical complexity. Subtle keyboard sounds pepper the second halves of “It’s Real” and “All the Same.” “Green Aisles” and “Municipality” feature contrapuntal guitar layers that could be at least partially inspired by Radiohead circa OK Computer. “Younger than Yesterday” features something that could almost be construed as an actual guitar solo. “All the Same,” a 7-minute plus tour-de-force, begins with a simple 3-note guitar riff only to end with several layers of acoustic and electric guitars alternating unison and harmony patterns. It’s quite charming when the song gradually decreases tempo before coming to a grinding stop.

The musical growth shown on this record is matched with a set of poetic, often poignant, lyrics. Primary songwriter Courtney strikes a nostalgic, melancholy tone throughout. While there are still plenty of references to shade trees, sand, and inner tubes, the band manages to transcend their suburban, beach-combing milieu. Many of the songs feature a speaker looking back on his life, realizing that the innocence he once embraced has been lost amongst the grind of adulthood. As trite and sentimental as this concept sounds on paper, Courtney manages to bring new insights to the overexpressed feeling of suburban malaise. On one of the record’s standout tracks “Green Aisles,” Courtney remembers, “All those wasted miles/ All those aimless drives through green aisles/ Our careless lifestyle/ It was not so unwise.” This chorus is an intriguing reversal of the feelings typically expressed by an older adult looking back on his youthful past. Instead of the older man realizing how foolish he once was, the adult realizes that he was actually wiser in his youth than he thought at the time. Elsewhere, the speaker reflects upon the “Jealous lovers left behind/ Wonder years pass me by.” A premature fade at the end of this track, “Wonder Years,” reflects the fleeting nature of youth, the fact that life will pass us by quicker than we might imagine.

Some will no doubt feel that Real Estate has taken a step too far away from their lo-fi, surf-pop roots. For these critics, the wordless, “ooh-woah” chorus on “It’s Real” reads as a step towards the overground, an attempt to create the kind of anthemic sing-alongs that have thrust bands like the Arcade Fire further into the mainstream. But, on Days, Real Estate retains their unassuming nature while subtly expanding their sound. They continue their delineation of the suburbs and beaches of Jersey while speaking to a more universal experience. In short, Real Estate has created the kind of sublimely beautiful record that even a cynical sand-hater might appreciate.