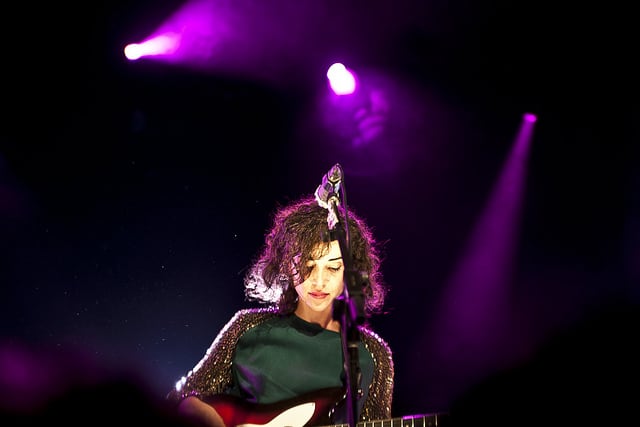 While finding a good vantage point on the cavernous floor of Portland’s Crystal Ballroom, I reflected that seeing an indie band on the upward side of popularity has its drawbacks. While it’s wonderful to be able to see an incredibly talented musician like St. Vincent frontwoman/bandleader Annie Clark up close and personal (and with any luck, she’ll be commanding bigger and bigger venues soon), it also means having to deal with one’s fellow hipsters equally up close. While the opening act, Cate Le Bon, strummed her guitar on a stage that looked far too big for her and to general audience indifference, I grumpily stood and listened to crowd. On one side, a large group of individuals loudly debated (and insisted on) Clark’s sexual orientation and parsed out her lyrics to prove vague points; on the other, a young man in horn-rim glasses and a patchy beard declaimed that Wilco guitarist Nels Cline had been “in some important jazz fusion” bands, the “but you’ve never heard of them” apparently going unsaid. In short, I felt I had walked into a sitcom parody of an indie rock concert audience.

Fortunately, there was not much delay between Le Bon’s final song (and the affable but tepid round of applause for her) and St. Vincent coming on stage. Like any one-person musical project, there’s always the question of whether the bandleader actually composes the entirety the band or whether producers and collaborators deserve a fair shake themselves. But when Clark stepped up to her microphone, there was little doubt that she is the band. Surrounded by a white plume of smoke, dressed in a simple dark dress, Clark was essentially the only visible person on stage. While several musicians could be seen dimly behind her, darkly clad and slightly behind the smoke, everything on stage was designed to highlight Clark’s presence and primacy.

For good reason: opening with the haunting synthesizers and choral vocals of “Surgeon,” Clark had a powerful and immediate stage presence. Silhouetted by the stage lights and smoke, she seemed both fragile and stark, the opening sally of “I spent the summer on my back/ Another attack/ Stealing just to get along, get along, along” sounding like something out of a dream. For the rest of the performance, she leaned heavily on tracks from her new album, Strange Mercy, and wisely so. It’s by far her best and most cohesive album, the songs lending themselves well to the wide dark room and unexpected (even if you’ve heard them before) moments of violent squalls of noise and dissonance. After a pounding, heavy rendition of “Cheerleader” (which most of the normally reticent Portland crowd sang along to the chorus), Clark greeted the crowd simply. She seemed willing to let her songs and guitar work speak for her for the majority of the performance, once pausing to tell a rather oblique story about a friend who decorated her apartment in mid-century furniture.

While Clark’s chops as a virtuoso guitarist are well known, many of her riffs and interludes come off as almost simplistic on record; live, they’re almost astonishingly complex and fluid. Clark’s unique blend of choppy, almost jazz-like guitar lines are particularly rare in indie rock circles, and it’s a pleasure to see something that could appear on a Robert Fripp prog-rock album actually get a crowd of floppy-haired kids to cheer and stomp along. She delivered a noisier, almost abrasive take on “Save Me From What I Want” from Actor and the metallic-voiced “Neutered Fruit,” but one of St. Vincent’s great strengths is Clark’s ability to mix the esoteric and abrupt with accessibility. The clear highlight of the concert arrived early in the set. The lights shone a little brighter, the smoke sharply billowed around Clark’s curly-headed shape and she broke into the haunting, ominous intro to “Cruel,” the brilliantly propulsive track from Strange Mercy. Clark’s voice is as powerful and clear in concert as it is on record, and her hunched, near duck walk posture during the immensely catchy main riff attested to the volatile passion she brings to the song. Amazing as she is on her albums (and she is), seeing her live brings a whole new dimension of appreciation to what she does. Regardless of how much of a stereotype the audience might be.