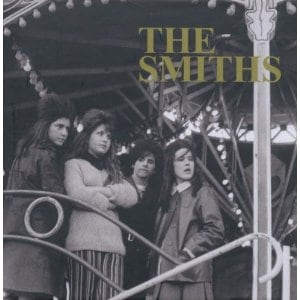 “Reissue! Repackage! Repackage!/ Reevaluate the songs!/ Double-pack with a photograph/ Extra track and a tacky badge.” Ah, but let’s not be too hard on Morrissey. No doubt when he penned these lyrics all the way back in 1987 as part of Strangeways, Here We Come, he did not envision that one day the vulgar picture being painted would be his own. Indeed, “vulgar” is hardly the word to describe Rhino’s comprehensive box set of the remastered Smiths discography. In the first place, a “dead star” was not a prerequisite for an item such as this to be demanded and produced. While the queen may be dead and the girlfriend’s in a coma, Morrissey, Johnny Marr and company are still very much alive (though the former gave fans a scare in 2009 by collapsing on stage). Secondly, time and distance from the Smiths’ era has proven that the living biography of rock took a distinct tilt – or, oscillated wildly, if you prefer – as a consequence of the fantastical collision between Marr’s iconic guitarwork and the bleakly beautiful croons of Morrissey’s high-minded poetical and political malaise.

The box set contains eight albums, remastered by Marr himself from the original tapes. Counted among them are the four studio albums – The Smiths (1984), Meat Is Murder (1985), The Queen Is Dead (1986) and Strangeways, Here We Come (1987) – as well as three compilations discs – Hatful of Hollow (1984), The World Won’t Listen (1987) and Louder Than Bombs (1987) and a live album, Rank (1988). Though it seems curious for the number of compilations to essentially equal the number of original records, Hatful is comprised of songs recorded over several BBC Radio 1 sessions, these versions in many cases very different animals from the studio recorded incarnations. World and Bombs were released in conjunction with each other: World as a UK release on Rough Trade Records and Bombs, an extended collection intended for us Yanks by way of Sire Records. The object was to mitigate import prices as this was a band with some serious trans-Atlantic devotion, but as these things go, the track lists were not identical so both items became essential must-haves regardless of fans’ domicile nation.

Whether you opt for the “Complete” set (available in CD, vinyl and digital versions) or can afford the extravagance of the “Deluxe Collector’s Edition” (including 25 vinyl singles, art prints, a poster, a DVD and expanded liner notes in a numbered, trunk-style package – all for just $499.98 (!)), no sort of marketing novelty could tell the whole story of the Smiths and the impact the band has had on the shape and progress of alternative music. “Marr-style guitar” may as well be a trademarked phrase in music reviewing; he is in every way a living legend as he continues to play as a sometimes-member of bands such as Modest Mouse and the Cribs, session musician, film scorer (having been the primary creative force behind the Inception soundtrack) and, currently, solo artist. As for the inimitable frontman, Morrissey these days is doing Morrissey things: “forbidding” Prime Minister David Cameron from listening to the Smiths and shopping his 660 page autobiography, pleading a case for it to be immediately published under the Penguin Classics imprint (though no one seems to be quite sure whether he is in earnest or joking, a question of ego temperament which is hilarious and satisfyingly true to type).

Potential buyers of this re-release likely own the catalog (and then some) already, as Smiths-lovers tend to be as extreme in their fanaticism as Morrissey is with his sexual secrecy. Still, a Marr remaster is a strong selling point, and to have this entire canon of activist lullabies and suicidal pop songs collated and archived under simultaneous issue might just have you saying, “Please, please, please let me get what I want.”