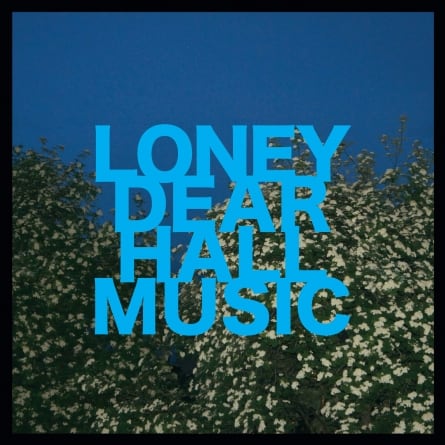 Jens Lekman isn’t the only sad Swede you should be listening to anymore. Loney, Dear, lesser known by his equally distinct name of Emil Svanängen, has been producing complex and dreamy arrangements for most of this decade, finding his talents transported to US shores when he signed with Sub Pop in 2006. He’s also toured with Andrew Bird, so it’s safe to say he’s had his share of Aryanesque multi-instrumentalists, but Loney, Dear stands out above the rest of his brethren with catchy hooks and an earnestness that leaks through his singing and composing like so few artists of this genre in recent memory. “Name,” the opening track on new album Hall Music, in particular begins with a capella singing and as he continues to describe hearing an unknown paramour’s name over the fields, his vocals get flexed and slip into an achingly pretty and bendy voice assist which then takes over for the rest of the song. It’s pronounced and suggestive, setting a bar that this record continues to hit note after note.

On a technical level, Svanängen could use some work, particularly his singing voice – it bends, it cracks, it occasionally slips out of register. However, this helps infuse him with character, like on “Young Hearts,” where he goes from ersatz Jeff Mangum to crooning and back again, with a delightful register that catches the ear with its ease of shift. “Young Hearts” also has a quite nice synth and keyboard drone, but it is masked and backtracked, only coming out in the pauses of the lyrics. It’s not overwhelming or central to the track, but it provides a wonderful sense of support – a beautiful static of sorts that makes the song thick and atmospheric without falling into the trappings of haziness.

Almost as an answer to a question of his versatility, “Durmoll” is built around a front-and-center horn and keyboard combination that swirls quite nicely and builds progressively, keeping its own time as Svanängen’s voice combines onto it. With its complicated blending and forceful higher register vocals, it’s the best song Thom Yorke forgot to write for The Eraser as well as a unique and exciting piece of pop with an uplifting crescendo that segues into a wonderfully brief coda. Rather than fade away, our song burns out, like so many things do.

“I Dreamed About You” overcomes its banal titling with a porous, hefty building track that features Svanängen almost getting his Brian Wilson on, peppering his singing with drippy sweet higher register hooks as the instrumental swells behind him, faster every few bars, like a spike of emotion, only to be pulled out again. This technique is used to much effect on this record, acting almost as a call to attention – there is something to be said about segues, but the suddenness helps break the album into individual sections, which is all too necessary when playing in this genre. “What Have I Become?” with its backmasked wailing and frontward female vocals, closes the album with a distinct Tegan and Sara interplay. “Calm Down” might be the only song in recent memory with what can only be described as a charming xylophone solo, and Svanängen’s singing is quaint and soft, but he is able to wonderfully flex into a light falsetto as he sings, “There’s nothing after you,” with the conviction the subject of the song needs to hear and a dense orchestral style key line to follow.

I don’t mean to imply Svanängen is derivative- what makes Hall Music so memorable is how his compositions are distinct, springboarding from other work more than using them as a base, but tweaked and amplified with enough personality. They don’t sound like cut-outs or straight lifts from other records. These songs feel less like a collection and more like a tightly arranged series of sonic stories. For a record called Hall Music, this album really demands inspection – chamber music it’s not.

Key Tracks: Name, What Have I Become?