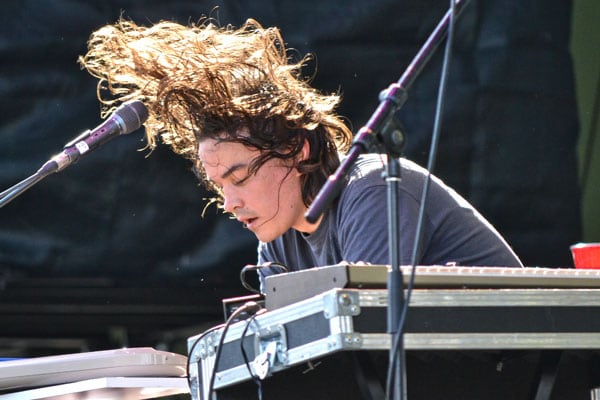 Performing live, Moonface is more than just Spencer Krug’s one man show. Touring behind the debut album Organ Music Not Vibraphone Like I’d Hoped, Krug (on keys) enlisted percussionist Mike Bigelow to provide the other half of the equation implied by the album’s title. A few lit candles and the image of a roaring fire was projected behind Krug and Bigelow. Perched atop Krug’s synthesizer setup was a miniature lighted globe, its mismatched hemispheres feeding into one another confusedly. One inebriated fan placed her bag on the stage in front of Krug’s keyboard as he entered in a brown, long-sleeve button-up workshirt and Bigelow in a simple tee, capped with a tight green beanie. When a request from the crowd in front came to “Rock Me Amadeus,” Krug returned: “All right, we’ll rock you Amadeus.”

While a drunk in the crowd tried to score a threesome, Moonface launched into “Whale Song (Song Instead of a Kiss),” its atmosphere, quick gait and rising scales requiring expert coordination at the boards by Krug, enunciating the track’s slow, haunting verses through a slab of greasy hair cascading down in front of his face. Bigelow had no trouble keeping up, banging the whale ribs of his set maniacally with both hands, the sound resounding hollowly with each intemperate stroke. Afterward came “Return to the Violence of the Ocean Floor,” Organ Music’s lead-off, another slow-burning affair (like the whole album practically), which in sustained high notes and dribbling vibraphone tones left the impression of water dripping endlessly through sieves of eroded stone, or the gradual sinking of inert matter down to the lowest levels of life far beneath the ocean waves. Organ refrains kicking in to adorn the water with a digital sheen, the crowd sang along as Krug moaned, “Oh, should’ve been a writer/ Should’ve played guitar/ But those kids keep coming down the fucking hill.”

The manic “Fast Peter” rode in next, slightly diluted in urgency without the backing vocals that gives it its secondary thrust and momentum, but still rolling along at a clip similar to the album version. Amid echoing, twitchy synth and Bigelow’s digital drum-kit cymbals, Krug pleaded, “Won’t you win the race for me?” before the song crumbled into a meandering outro, his fingers roaming the keyboard unconsciously. Directly following was a cover, “All Fires” (from Krug’s other-other-other band, Swan Lake) done slow and deliberate in an electronic step, turned at long last into one giant synth riff by the end. Cut from the final mix of Organ Music, “The Way You Wish You Could Live in the Storm” featured less dense arrangements and was less dependent on hooks and phrasing at first than the other tunes performed that night, employing instead loops of scales on the keyboard, squealing notes and chords that would drop off at the end of every measure. By its conclusion of extensive phrasing on the keyboard and hasty vibraphone arrangements, the crowd had grown restless, each song of seven-plus minutes gradually draining their collective (wasted) attention.

Moonface’s last two songs before departing were “Loose Heart = Loose Plan” and a new, untitled track. The latter was introduced by Krug with a simple observation prompted by audience wonderment at his setup onstage: “I do have so many buttons.” Dancier than anything on Organ Music or even its predecessor, Dreamland EP: Marimba and Shit-Drums, it unfolded in fake bass drum and hi-hat, in rhythms reminiscent of hip-hop and paired vibraphone notes. Stutteringly, with significant vibraphone synchronization, Krug implored during the song in turns, “Why won’t you send me a letter?,” “I want to be the only beast on your mind” and “Send me an angel/ Right now.” “Loose Heart = Loose Plan,” on the other hand, provided proof that Krug was just as sauced as the crowd, offering a simple “Fuck it” after one false start, fiddling with his keyboard, preceding a second attempt with, “It’s this thing that keeps happening every night.” The track’s bleak initial seconds and lush extended intro, delivered almost perfectly, were followed with increasingly distracted vocals (as Krug hastened to keep pace on keyboard) mirroring the lyrics themselves: “First we sing falsetto/ Then we sing lazy.”

But how can you blame the prolific Krug for overextending himself in such a charming fashion? Bursting with creativity like the moon’s face (or a miniature globe) does with light – or like those with a swollen, round “moon face” – it’s always a pleasure to get a taste of what he’s working on every time he circles the globe, bringing a bit of himself, and a little light, to every quarter of the planet.