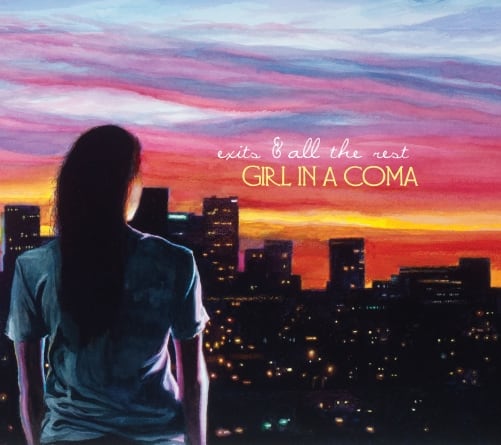 Girl in a Coma

Exits & All the Rest

Coming off the appropriately titled, homage-centric Adventures in Coverland, Girl in a Coma returns for more distorted, red-blooded guitar coaxing we’ve come to expect from the San Antonio trio. It’s clear from the get-go of “Adjust” that Exits & All the Rest is a smeared palette of influences, recalling the all-but-extinct loud/quiet/loud formula of Nirvana and its imitators. Without a shred of Courtney Love shrillness, Nina Diaz appropriately whispers and screeches throughout the gloomy, rainy day anthem in her own visceral manner.

“Adjust,” as it turns out, is the only trapping of ’90s within. Before long, Exits & All the Rest establishes itself as Girl in a Coma’s most jukebox-friendly album to date. Diaz executes another relentless performance, as does drummer (and sister) Phanie Diaz, and bassist Jenn Alva, and to hear them rock out with the simplest of instrumentation as effectively as they have in the past reaffirms Joan Jett’s instincts to invite them to her label. Tracks like “One-Eyed Fool” and “Knocking at Your Door” represent stop-start power chords and teeter-tottering beats straight out of Jett’s heyday. Mike McCarthy’s production melds classic rock and contemporary ideologies into a universal aesthetic. Exits stays loyal to its roots without sounding outdated or exploiting novelties.

Diaz is as hard-boiled and blunt as ever about heartbreak and loneliness, howling angry sentiments on “Control” (“I don’t understand/ Why you never did call me when I say you could/ You never did call me and I know I’m good“) and “She Had a Plan.” Alva and Diaz’s rhythm section abrasively complements and echoes their frontwoman’s estrogenic ferocity, but for as volatile as this all-female act is, they leave the melodrama and one-dimensional feminism out of former riot grrrls.

Exits answers to the critical acclaim the band has had as of late. It’s little wonder why they’ve shared stages with the likes of Morrissey and Frank Black. At times the album succumbs to its constraints and its tunes are probably more effective live. These chicks can rock – but we already knew that. Though their songwriting has tightened, you could toss all three albums into a shuffle mix and wouldn’t be able to decipher much of a lineage or evolution to the band’s sound. But hey, if it ain’t broke don’t fix it.