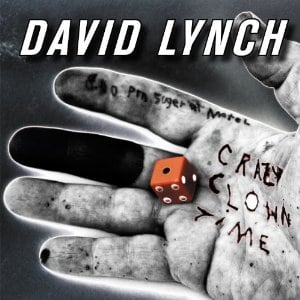 David Lynch’s artistic approach can be summed up in a direct quote: “My childhood was picket fences, blue sky…Middle America as it’s supposed to be. But on the cherry tree, there’s this pitch oozing out…and millions of red ants crawling all over. I discovered that if one looks a little closer at this beautiful world, there’s always red ants underneath.” An avant-noir filmmaker who’s trudged through the seamy side of suburbia for decades, Lynch has proven to be a surrealist renaissance man, utilizing all forms of media to follow his vision down the rabbit hole. His work both entrances and induces squirms in equal measure, but while he’s achieved his greatest notoriety via celluloid, he’s also acted, painted, animated music videos, produced albums, written songs, published books on Transcendental Meditation, and marketed his own signature brand of coffee by discussing its merits with a palmed Barbie head.

After years of collaborating on musical projects, it should come as no surprise that the 65-year-old Lynch would release a solo LP, characteristically titled Crazy Clown Time, filled with an ominous brand of electro pop that Lynch describes as “modern blues.” Many tracks on this album echo his numerous film score collaborations with composer Angelo Badalamenti. From the first discordant note, Lynch’s music mirrors his unnerving cinematic aesthetic, conjuring a lurking sense that all is not right.

With Crazy Clown Time, as with the entire scope of his work, Lynch forges an off-kilter world of sweet dreams turning sour, smoke billowing from behind doors, rot eating at white picket fences, roses blighted. He hides behind the curtain for the opening track, allowing guest vocalist Karen O of the Yeah Yeah Yeahs to pilot “Pinky’s Dream.” An unusual tactic to introduce an album via another singer, but with Karen O imploring the eponymous Pinky to “watch the road,” imagery of the passing yellow lines in Lost Highway or the roadside calamity in Mulholland Drive may flicker in the brainpans of the initiated. Lynch waits until the second track, the album’s first single, “Good Day Today”, to step behind the mic. We hear the first of many versions of Lynch’s voice filtered through both technological and self-induced manipulation, though his peculiar cadence bleeds through any and all studio wizardry. A fluffy, upbeat track, “Good Day Today” approaches a techno feel while Lynch delivers the simple lyrics (“So tired of fire/ So tired of smoke/ Send me an angel/ Say it to me/ I wanna have a good day today“) as if post-lobotomy.

In “So Glad,” Lynch throws his voice up into a karaoked Neil Young range. He whispers over the foreboding haze of bass, programmed drum and droning organ throughout “Noah’s Ark,” and in “Football Game” (rife with the wavering tremolo guitar effect synonymous with the Lynchian atmosphere) he sings as if gurgling a “damn fine cup of coffee.” In “I Know,” an organ, surf guitar and steady drums prop up a razor-edged vocal effect that calls to mind a non-organic Tom Waits. It’s as if, track to track, Lynch changes identities much like the disorienting character shifts in some of his best films.

There’s sparseness to Lynch’s lyrics, with simple lines repeated ad infinitum. Lynch seemingly saves all his words for “Strange and Unproductive Thinking,” where he’s at his most verbose with an elucidation on the purported tie between dental and mental health, delivered via a computerized monotone. Appropriately titled, the monologue could be the fixated ramblings of a robotic obsessive-compulsive. Set to a rumble of a plucked bass guitar and scattered drum beat, the track proves entertaining at first if only for its novelty, but in dragging on for over seven minutes it becomes virtually unendurable.

For the title track, Lynch pinches his voice up to a childlike register while describing in repetitive detail the revelries of a backyard teenage beer party. When joined by reverse-vocal effects and undulating female moans, darkness permeates what otherwise could be a debauched slice of Americana. When, in his raspy falsetto, Lynch sings that “Suzy, she tore her shirt off completely/ Then he poured beer all over Sally” and “We all ran around the backyard/ It was crazy clown time/ It was real fun,” there’s a frightening presence in each word uttered from this small-town fever dream.

In the various incarnations of Lynch’s fractured world, it’s all milkmen and tree forts until a body washes up on shore, identities inexplicably play musical chairs, or someone finds a severed ear decaying in a field. Fans of Lynch have plenty of reason to run around the backyard for Crazy Clown Time, while those unfamiliar or unimpressed by his cinematic work may want to wake from the nightmare. It all depends on whether you prefer picket fences or the red ants underneath.