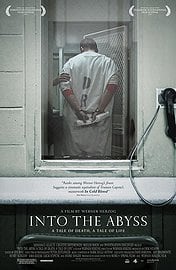 [xrr rating=4/5]
In the later portion of his career, Werner Herzog has become one of our most important documentarians, carrying a worldview equally weary and wide-eyed from the fictional milieu to stranger-than-fiction realities. In the past decade he’s chronicled nature crusaders, life in the frozen reaches of Antarctica and entered a cave seen only by a handful of modern men. In his latest film, Into the Abyss, Herzog turns his lens to America and its use of capital punishment.

Part Truman Capote and part Errol Morris, Into the Abyss examines the fallout surrounding a triple homicide in Conroe, Texas, a suburb of Houston. It is important to recognize that Herzog is from Germany, a country where the death penalty has been abolished. In fact, the United States and Japan are the only two industrialized nations that still permit capital punishment, joining the ranks of nations such as Egypt, Iran, Cuba, Vietnam and Sudan. Herzog is clear from the outset that he does not support capital punishment, but Into the Abyss is anything but a dogmatic 106 minutes. Instead, Herzog uses the issue as a way to delve into the inner lives of both the perpetrators and the victims of the horrific crime.

Subtitled “A Tale of Death, A Tale of Life,” Into the Abyss and Herzog push into the emotional lives of the people affected by the tragedy. As the film begins in 2010, Michael Perry, 28, is on death row for the 2001 murders of Sandra Stotler, her teenage son Adam and his friend Jeremy Richardson. Based on incontrovertible evidence, Perry (along with Jason Burkett, sentenced to life in prison) shot their victims to death while attempting to steal a car from the Stotler residence.

Herzog tells Perry right away that he is against the death penalty, adding, however, “I don’t have to like you.” But whether or not Herzog likes Perry and Burkett is immaterial. He is trying to dig into the emotional heart of the killers and the victims. Herzog begins the film with police footage of the crime scene, shown in reverent silence save the chilling and mournful soundtrack. The murderers caught Mrs. Stotler unaware as the camera pans past the blood-splattered walls to show a television still on, a sheet of unbaked cookies waiting to go into the oven. In Herzog’s hands, the footage is tragic artifact, similar to the frozen fish he finds in the emergency tunnel in Antarctica in Encounters at the End of the World or the cave paintings from Cave of Forgotten Dreams. He later shows us the bodies of Adam Stotler and Jeremy Richardson lying prone, limbs akimbo, on a backwoods road in grainy crime video. It’s as if we are allowed entry into an alien world, a place far removed from the dark comfort of the theater.

Herzog interviews Lisa Stotler-Balloun, daughter of one of the victims, who soon crumbles into tears as she recounts all the deaths in her family over the years (not only does she lose her mother and brother, but multiple other family members to accidents and disease). Herzog allows his camera to linger on Stotler-Balloun, asking her how the loss feels rather than spare her the indignity of reliving the tragedy, pushing to really grasp the largeness the vacancy left by the murder of her mother and mother. He also keeps filming as Jeremy Richardson’s ne’er-do-well older brother breaks down as he blames himself for introducing his little brother to his would-be murderers, never flinching from the raw display of human emotion.

Although Herzog doesn’t attempt to explain the senseless crime here, he does delve into family ties. He spends a good deal of time with Burkett’s father, who credits himself with both saving and ruining his son’s life. A recidivist serving multiple sentences, Burkett, Sr. claimed that his begging for his son’s life in court swayed the jury away from executing him (the same cannot be said for Perry, whose family is absent here). But Burkett’s father also blames his drinking and drug addiction as the reason his son ended up a criminal in the first place. Herzog delves deep into the man’s grief, asking him what he would do if he could start over. Rarely have you seen a man on the brink of total self-hatred as when Burkett’s father admits that he felt like a “total failure.” Of course, this realization came as he was being transported back to his cell while cuffed to his son.

Herzog seeks the truth and not all of Into the Abyss concerns the principals involved in the triple homicide. Herzog interviews a prison chaplain (visibly upset by the executions) who continues to offer comfort to the inmates in their final minutes. He also talks to a captain who served in the death house before the 1998 execution of Karla Faye Tucker pushed him over the edge. Just like Stotler-Balloun and Jeremy Richardson’s brother, these men are shaken by death, teary-eyed and remorseful. And this response is drawn by people who are sentenced by the state to die, not close family members.

Into the Abyss is a steely look at the darkness that plagues much of rural America, at dingy bars where men go to drink and get into fights. But this is a Herzog picture, meaning amongst the terrific and the horrible we also glimpse the bizarre. As the stolen car sits in an impound lot, a tree grows up into it from beneath. And in one of the final images, Jason Burkett’s new wife (one he met via letters only after imprisonment) displays the image of an in utero child on her cell phone, one that may have come from smuggled-out semen since conjugal visits are not allowed. The position of the fetus is strangely reminiscent of the bodies we see in the beginning of the film, set in the same gray tone. But instead of murdered in cold blood like Adam Stotler, this unborn child is the product of contraband seed from a convicted murderer. It is life sprung from death, one that is probably damned lucky and also plain damned that its father is behind bars.