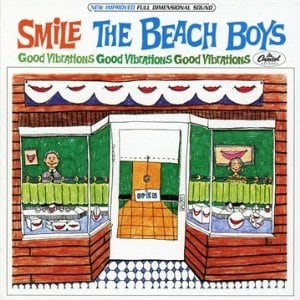 [xrr rating=4.75/5]
Before there was Chinese Democracy and Detox, one fabled unreleased album presided over all music mythology like the patron saint of shelved projects. Smile, the Beach Boys’ fabled follow-up to touted masterpiece Pet Sounds was set to be the album that changed pop music and put them critically and commercially on par with The Beatles. In 1966, while the rest of the band was on tour in Japan, Beach Boy Brian Wilson became obsessed with writing and arranging Smile’s complex pop structures. After spending several months and $16,000 (more than the cost of most albums) he emerged with the song “Good Vibrations” which was to set the tone for Smile, linked suites of songs that Wilson intended to comprise “a teenage symphony to God.”

By early 1967, the band’s infighting, harrowing recording sessions and Wilson’s own lethal cocktail of methamphetamines and emotional instability eventually caused production to halt. It was never really known how much of Smile was completed, but for years the combination of surfacing session bootlegs and songs finally appearing on later releases lead to countless fan-made assemblies as its legend grew. In 2004, Wilson shocked the music world by realizing his original vision and re-recording the album himself. Even so, interest and speculation on how the original Smile sounded intensified until this year when it was announced Capitol would remaster and release what existed of The Smile Sessions in one of the most thorough album collections ever assembled. For Beach Boys diehards and even those with just a pop culture curiosity, these Sessions offer much to Smile about!

The biggest challenge facing these Sessions is the expectation that they’re not going to just be great, but superior to the much celebrated 2004 incarnation and the demos that have been in circulation for years. This might be unfair to the album as it is, but once you factor in the handicap that this isn’t Smile but rather The Smile Sessions you’re plagued with looking at the most beautiful puzzle you’ve ever seen be troubled by missing pieces, hindering it from ever being truly completed. The first 19 tracks we hear are the Frankenstein’s monster of what Smile was when it was abandoned. Complex lush harmonies, Wilson’s sharpest writing and an elaborate feeling of purpose makes even this unfinished assembly one of the most incredible listens in the medium. As great as it was to hear Wilson’s vision seven years ago, hearing him here with all his youthful manic energy and ambition is not short of breathtaking. Even though demos of these songs have been around almost 40 years, they’ve never been heard in such dazzling quality. The rest of disc one contains songs cut from the album, montages of the album’s backing vocals, alternate mixes of the first single “Heroes and Villains” and, best of all, the beloved solo recording of Wilson’s “Surf’s Up” demo. These inclusions alone would have sufficed to make for a stellar (re-?)release, but the lengths at which Capitol goes to truly give you The Smile Sessions is, like the album itself, borderline absurd in the best of ways.

At first glance, the second disc screams of “for obsessive fans only” with its elongated alternate takes of different songs, some of which contain excerpts that would be flushed into completely different songs on later Beach Boys albums. However, given the top tier musicianship of the group, this collection is also excellent. Not only is it fun to hear how many different wholly enjoyable arrangements these songs had, but the chaotic nature of how much they evolved conveys the frustration anyone actually sitting in on The Smile Sessions must have felt. Included as well are scrapped comedy skits called “Psycodelic Sounds” that depict a miniature Wilson falling into his instruments.

Surprising as it may sound, The Smile Sessions more than live up to their 37 years of hype. While it is somewhat bothersome to hear a masterpiece that would have become a musical hallmark was only baby steps away from completion, what we hear are two discs of one of music’s mad geniuses at the height of his unhinged sonic mastery. Even if you heard the 2004 version, The Smile Sessions are absolute essential listening. “Good Vibrations” well worth picking up.