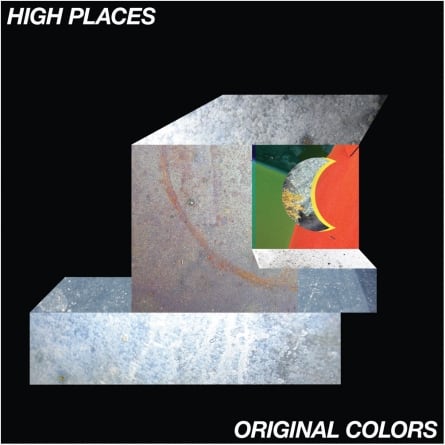 Thank God they’re doing better. High Places’ last album, High Places Vs. Mankind, was a pretty but dreary look at a new life, weighed down by a soggy middle section as impenetrable as the foliage on the cover. Perhaps they’ve found a niche, or perhaps they’ve just cheered up. Original Colors is a much more enjoyable record – vibrant, varied and like the work of a band that actually wants to make music. The previous album found the group settling into their new Los Angeles digs (a drastic change of pace from the Brooklyn that influenced the sound of their early records), but this time they sound confident and assured. The immediate difference between these two albums is the tempo and structure: Original Colors is literally more upbeat, featuring many “danceable” songs. It strays far and wide from the haze and melancholia that High Places Vs Mankind was steeped in, but never once does it feel like a cop-out. It’s an organic transition, like what snapping out of a funk would sound like if you could dance to it.

“Dry Lake” begins with clangy electronic bells, a surprisingly upbeat wail (like a funky ghost?) and a clanky percussion line. Singer Mary Pearson still sounds a bit distant, but the energy the song conveys elevates it to the forefront, as if she’s lost in the music instead of inside herself. “Sophia” keeps the trend with a washed-out vocal/backing meld that is punctuated and perforated by a rapid fire percussive streak that rescues it from the dregs of ambiance.

“Year Off” features plinking synths and a pseudo spoken-word intro, which seamlessly blends into Pearson getting her Debbie Harry on to maximum effect. It’s brilliant in its subtle way of both setting up the time between records and doubling as a dare to overcome any desire to retread. Instrumentalist Rob Barber is also one of the merciful souls to thank for this album’s decided charm, packing each track with layers upon layers, giving songs like “Banksia” a new life. On this one, he uses the drum machine as primary focus, giving the beat a cadence that’s the perfect frequency for neck-nodding. Pearson’s vocals are rich and echoey, and while she sings of drifting away, she sounds in control under Barber’s complexly metered production. Drum and bass is a clear inspiration on this album, perhaps as a challenge to overcome the apparent limitations of the name, but throughout the record the band seems dead set on challenging those notions. This is music that is as suited to an evening in as it could be to last-call music at a bar that charges too much and imposes a dress code.

Speaking of some bullshit, High Places still fall into some of the same old trappings. “Twenty-Seven” starts off on some electro-gospel hot garbage, with Pearson’s vocals rendered unintelligible. It sounds like an unfunny tribute to David Byrne and Brian Eno’s Everything That Happens Will Happen Today. That segment eventually leads into a rather exciting bass-driven section, complete with more disparate caterwauling, but the whole thing never quite recovers. Closer “Altos Lugares” suffers the same fate, both because of buried singing and a personal bias for misused foreign language. No grammar lesson here, but suffice it to say this song feels a bit too important for its own good; as Pearson sings about how “This could only happen here,” the sentiment it conveys is not of gravity but of bloat. It’s not the worst thing in the world to indulge, but under the guise of acting as a cornerstone, it becomes nothing but bricks.

It has its missteps, sure, but Original Colors is a kinetic little number. Even the title suggests the idea of a return to form, and when Barber and Pearson hit it, they hit it hard. Instead of being pretty but dense, they’ve concocted 38 minutes of perpetual motion. Some say it can’t be done, but the tone is more akin to a shark in the water, constantly in flux to avoid stagnant death. More groups could take a lesson from that. Not to say High Places is in beast mode or anything, but they’ve certainly found their way out of the depths, much to a mutual benefit.