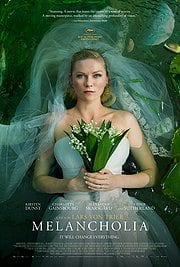 Melancholia’s prologue allows Lars von Trier to indulge in floridly vivid imagery that piles abstraction on to the literal at such length it begins to feel as if the entire film will be presented as some sort of fever dream, like an El Greco landscape brought agonizingly to life. Following that, the film is divided into two clearly labeled sections. “Part One” is entitled “Justine” and opens with the character of that name (Kirsten Dunst) on her wedding day, riding with her new husband (Alexander Skarsgård) in a stretch limo long enough that it can’t easily maneuver the country roads leading to the massive estate where the reception will take place. The manse belongs to Justine’s sister Claire (Charlotte Gainsbourg) and her husband John (Kiefer Sutherland), who’ve employed their considerable resources to give Justine this grand celebration.

The dark core of the fairy tale is revealed fairly quickly as it becomes apparent that Justine is harboring particularly gloomy feelings deep within her. She spends much of the night finding flimsy excuses to flee her own reception, however briefly, and the smile on her face becomes more painfully forced as the night wears on. There are hints of parental neglect and animosity in her past – notably, her mother (Charlotte Rampling, effortlessly imperious) gives a seething toast decrying the very validity of marriage – that could be weighing on her mood. More than that, though, it seems she’s dealing with a pronounced depression that can only be forestalled for so long before it starts provoking rash, destructive choices on her part.

The second half, entitled “Claire,” takes place some indeterminate time later. Justine’s depression has pushed her to a point of near complete incapacitation, leading her to be taken in by Claire and John. At the same time, Claire has become fearfully fascinated by a strange cosmic event as a small planet named Melancholia is hurtling towards Earth. The official word from the scientific community is that it will slingshot around Earth, leaving the planet and its populace unharmed, but there are doubters and conspiracy theorists out on the internet who are warning of a far nastier fate. It’s a terrifying possibility that Claire can’t shake.

On a surface level, the two major parts of the film come across as two hefty short stories that share characters and perhaps thematic elements, especially the sense of heavy burdens that comes rushing towards people, figuratively and literally. The connections are more profound than that, however. The latter half essentially explains the first, giving a foundation to Justine’s crippling moroseness once she reveals a vaster knowledge of the dire fates of a cruel, largely empty universe. She wasn’t struggling with mental illness, but was instead operating in wholly logical fashion given the dire information she had at hand. If all human relationships are exercises in futility – distractions from the unalterable trudge towards oblivion instead of brilliant beacons of spiritual purpose – then why invest any energy into them? Since mortality is built into the human experience, Justine’s rejection of worldly niceties, her inclination to totally shut down, is, in von Trier’s analysis, the only sane response.

That conclusion may be a bit of a leap, but the work of von Trier practically clamors for such theorizing, though not because it’s overly cryptic. If anything, von Trier is capable of driving home his points with undue forcefulness (the final shot of Melancholia is an especially bombastic example of this), a tendency which can make the work seem overly sensationalistic or, a charge that I think applies to a dismaying amount of his films, imbued with a sadistic pleasure in tearing down the characters he creates. Instead, von Trier invites broad supposition about his intent and his ideas because of the way he transparently grapples with big concepts in his drama. If the plotting in Melancholia occasionally grows a little slack or some of the characterization edges towards the simplistic, the totality of the piece still clearly shimmers with the potency of the original philosophical wrangling that inspired the film.

Part of what grounds the piece is the stealthy performance by Dunst. At times, it seems that she’s been charged with playing a series of shifting moods rather than a character, but the incisiveness of her acting is cumulative. Dunst has a ways of deadening her eyes when her character is at her grimmest and the effect is striking, both in the way that it signals a person who has chosen a slow disconnect from her own humanity and then the added intensity in those moments when empathy or warmth comes creeping back in. Gainsbourg does well with the showy moments as Claire unravels in the face of onrushing tragedy, but Dunst impresses more with the slow burn intensity of her acting.

There’s been a clear strategy of provocation in much of von Trier’s work, but Melancholia largely sets aside that habit. (He’s apparently decided to reserve that tactic for press conferences at major film festivals.) The director isn’t bullying the audience or his characters. With Melancholia, he’s coming at his existential fretting from a different place, maybe a braver place.