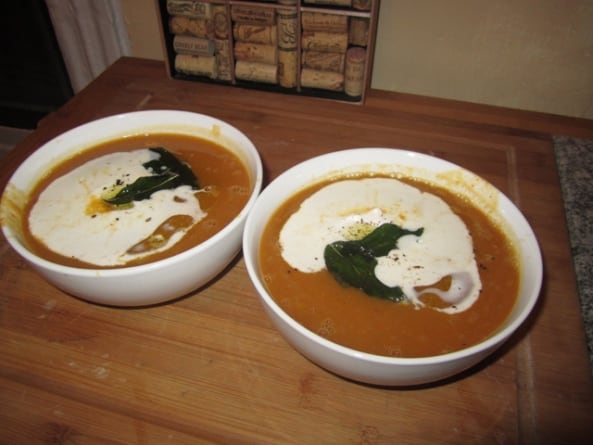 As much as Thomas Keller is known around the globe for the French Laundry, he has also gained appreciation from patrons of more modest means for opening up his bistro, Bouchon. Perusing his cookbooks for this feature, almost everything in The French Laundry Cookbook was immediately out of the realm of possibility. I just can’t afford truffles or foie gras or morels. Bouchon, however offered a much larger collection of recipes to choose from.

For my first introduction into the world of Keller (I have neither made anything from his cookbooks or eaten at his restaurants), I chose his butternut squash soup. To me, this epitomizes bistro-style cooking and Keller’s emphasis on superior ingredients and flawless execution. Also, my CSA had been giving me a lot of squash and I was really, really sick of just roasting it.

Aside from getting a crash course on two techniques I had yet to use (pureeing soup and browning butter,) this was a remarkably easy recipe to make. To start, cut the neck off the squash. Then slice the bulb in half and remove the seeds. Rub canola oil inside and outside then add some salt and pepper. Place a sprig of sage in each cavity and place them cut side down on a roasting pan and stick them in the oven until completely tender.

Meanwhile, peel the neck of the squash and coarsely cut it into ½-inch pieces. Add some oil to your stockpot and saute some leeks, carrots, shallots and onions. Add garlic and the squash and season with salt and pepper. Here, you’re supposed to add honey, which I mistakenly thought I had. Instead, I added a tablespoon of sugar and stirred it in. Now add the stock and the bouquet garni. Bring the stock to a simmer for 10 to 15 minutes.

If you’ve timed this right, your roasted squash should be done sometime during the 10-15 minutes the soup is simmering. Wait for it to cool and then scoop out the flesh, discarding the sage and the skin. Add the flesh to the soup and let it simmer another half hour or so. When it’s done, toss out the bouquet garni and start pureeing the soup and then passing it through a fine strainer. Taste and adjust seasonings.

Now, you can cool the soup for later consumption or get started on the next few steps for immediate serving. If you want to serve the soup soon, return it to the stock pot and keep it warm.

First, whip the creme fraiche with some nutmeg until it holds a shape and then put it back in your fridge, covered. Now heat a skillet on high heat and add the butter, spreading it evenly over the skillet and scraping up any bits that stick to the pan. Your timing has to be very good on this, since browned butter can quickly turn black. As soon as the foaming has stopped and your butter has a nice hazelnut brown color, take it off the heat, pour it into the soup and mix it in.

Now for the garnish. You can use either some thinly sliced chives or you can fry some sage leaves. I chose the latter. It only takes about 30-45 seconds to make a nice, crispy sage leaf. You can tell they’re ready because the bubbling on the leaves will stop, meaning all the moisture has evaporated. Drain and sprinkle with salt.

To complete the dish, ladle the soup into a bowl. Put a spoonful of the creme fraiche in the middle of the bowl. Add some freshly ground black pepper and a few fried sage leaves. Drizzle on some finishing olive oil and enjoy.

What I liked best about this was the amazing depth and complexity of the taste of the soup. This is a prime example of taking a little extra time to add a little something extra to your dish. The two methods of cooking the squash definitely made a difference: roasting added a hearty robustness while the sauteed squash retained a light, healthy feel. The browning of the butter added a nice, nutty flavor. The creme fraiche and the olive oil brought everything together to complete the most delicious soup I have ever made. I do wish that I had the honey to add as called for, since I think that would’ve added a nice layer of taste. All in all though, it was a perfect introduction to Thomas Keller.

Tris Miller works at a New York City institution and enjoys yelling at slow moving tourists, as well as some clueless residents. He holds a completely useful and productive degree in history from Northeastern University in Boston. When he’s not stuffing his face at one of the city’s billion restaurants, he enjoys reading dystopian fiction, trying to find a movie with a pulse of originality, and listening to gigs of backlogged music. He is currently trying to learn French and failing.