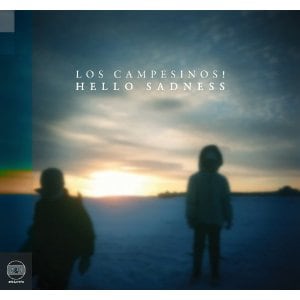 Hello Sadness is already being described as a “breakup album,” a term that brings to mind decades of beautiful tradition from Bob Dylan to Beck and, at its worst, songs of overwrought emotion and intense bouts of melodramatic heart-rending and/or soul-searching. Whether that term fully applies to the latest effort from Los Campesinos! is open to debate – and in some ways it could just as well apply to the troupe’s earlier albums – but regardless, with Hello Sadness the group has created its most mature and musically diverse record to date, without sacrificing any of the sharp wit or pop-punk immediacy that first garnered the group so much indie attention.

The album’s first couple songs are classic Campesinos; both cover familiar territory and would fit in nicely on either We Are Beautiful, We Are Doomed or Romance Is Boring. “By Your Hand” is a snappy, all-hands-on-deck sing-along that foreshadows death at the hands of a significant other and employs group vocals, handclaps, and cleverly juvenile lyrics about kissing for hours and hands in trousers. In the same spirit, “Songs About Your Girlfriend” is a hard-charging tune with razor-sharp lyrics and a nasty temperament. Both are wonderfully arranged and executed, the types of songs that Los Campesinos! by now can reel off with obvious ease.

But smart-assed wisecracking can only get a band so far. If the group’s earlier material centered around relationship woes that in some ways felt like typical ones that could be overcome via chemicals or a snide, self-satisfied putdown, on Hello Sadness these issues feel much more permanent and consequential. Gareth’s vocals – and the rest of the band’s, for that matter – sound old beyond their years, and the album also has a more balanced flow and pace than its predecessors. The band has figured out that it’s possible to go around the wall instead of trying to run right through it. Examples can be found on nearly every song: the slow opening to the title song that eventually builds to a much larger, more epic collage of sounds; the gentle, almost-acoustic arrangement of mournful ballad “Hate for the Island;” the measured, weary vocals on “Every Defeat a Divorce (Three Lions)” and “To Tundra.”

The lyrics aren’t exactly confessional, but there is a bare bones honesty to much of the album. Closing song “Light Leaves, Dark Sees Pt. II” makes perhaps the best use of this approach, its lonely narrator fixating on key traits of a presumably gone lover: hands on hips, a pelvis with stretch marks and, less romantically, the “sound of your pissing through the thin walls.” Elsewhere there is once again all manner of physical references – lipstick on a knuckle, bloodshot eyes, bloated corpses, blisters – augmented by numerous mentions of birds and one mention of weed-induced paranoia.

It’s possible that some listeners will grouse that Los Campesinos! has mellowed a bit and isn’t as aggressive as before, but if bands don’t evolve even just a little bit, they eventually become the Ramones in old age. There’s still plenty of bile to Hello Sadness to be sure, and the album won’t be mistaken as the work of any other group, but its lasting quality is how much more grave and serious it sounds than those earlier records. It’s the most “adult” album the band has done, and if along the way it puts an end to the mostly inaccurate image of Los Campesinos! as a pack of equally exuberant and snarky indie kids, so much the better.