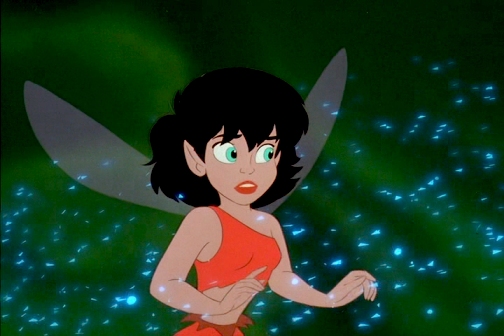 I talk a good game about the movies that turned me into the bleeding-heart hippie I am today, and FernGully: The Last Rainforest makes frequent appearances on a list that is only a little bit facetious in nature. Truth be told, I had not seen FernGully in at least 12 years. Some defining environmentalist moment! Before my recent re-viewing, I would have said, “The premise is simple: woodland fairies have to protect their home from loggers.” Upon review, my adult mind, which insists on seeking logic and reason behind the events and actions of characters, found the entire thing confusing, weird and not nearly that straightforward.

On a superficial level, yes, there are fairies protecting their rainforest home from loggers. Beyond that, what you would imagine could be a compelling story is diluted by stupid interim events and tepid animated romance. Heroine Crysta is learning to control her magic powers when she shrinks Zak, the human logger with an Australian driver’s license and a distinctly American accent. A lizard voiced by Tone Loc sings an entire song about eating Zak but changes his mind when Crysta asks nicely. The fairies find Zak’s Walkman and have a dance party. He teaches them some modern slang. Zak and Crysta kind of fall in love and she teaches him to understand nature, in particular to feel the pain of felled trees. Robin Williams, as escaped laboratory test subject Batty Koda, performs perhaps the only rap of his career. Bonus points for sneaking animal rights into the dialogue, Bill Kroyer.

After some 40 minutes of plot stagnation, Zak’s logging company frees Hexxus, a smog-and-oil nurtured villain who is much sexier than I remembered and voiced by Tim Curry. As revenge for trapping him, Hexxus leads the unwitting loggers straight into FernGully to destroy the fairies’ home. The dramatic climax is a battle between the fairies and Hexxus with the duped loggers cowering in fear. Crysta’s mentor sacrifices herself so that the fairies can absorb her magical powers, then Crysta seems to do the same to plant a tree inside of Hexxus and trap him for good. She is feared dead but emerges from a blooming flower. We know she is in control of her magic powers now because a trail of new flora appears behind her. I have no memory of this part of the movie from my childhood. In the end, Crysta restores Zak to his normal size and he and the other loggers depart on a mission to save the rainforest.

Confused? I was. For a 75-minute film, the plot is sparse, weakly bolstered by inappropriate (but kind of awesome) musical numbers and glowing animated mushrooms because apparently the rainforest is both beautiful and supernatural. To this day, rainforests are destroyed for agriculture, logging, mining, dam-building and cattle ranching. When old growth stands are removed from the ecosystem, erosion, flooding, the extinction of rare species of plants and animals and much more follow. But all I got from this film was that the rainforest is pretty and there might be some magical beings living there. Is that why I should care about saving it? I was definitely smart enough to process the harder truths by elementary school; now I wish this film hadn’t pandered to my young self quite so egregiously. Finally and tragically, FernGully insists on reminding the viewer that it is not a Disney film whenever possible. The animation is flatter and the songs are more out-of-place than in that other 1992 animated masterpiece, Beauty and the Beast. I almost wish I hadn’t watched it again.