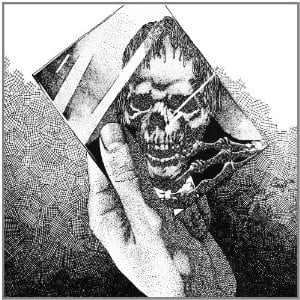 [xrr rating=4.25/5]By coincidence, I was listening to Replica, Daniel Lopatin’s newest album as Oneohtrix Point Never while checking Twitter for coverage of the recent evacuation of Occupy Wall Street protestors from Zuccotti Park. Lopatin’s music evoked the same uncanny sense of dislocation I experienced while reading about this trampling of democratic ideals and actual human beings. As Oneohtrix Point Never, Lopatin creates music steeped in paradox, the sound of finding one’s own country and culture strange, an outsider even at home. Bearing an odd relationship with time characteristic of certain new forms of music, Lopatin’s material sounds futuristic, drawing from a sci-fi aesthetic. But his is a futurism rooted in the past, a form of cultural archeology bent on recovering an earlier vision of the future that is already outdated in our current present. Highly synthetic yet oddly organic at the same time, Lopatin’s music makes technology seem to pulse with living animation. It is the vehicle for exploring the ruins of our cultural past. While earlier albums comfortably settled into a familiar retro-futurism, Lopatin has tapped into something more contemporary with Replica, which sounds like a reawakening to music’s social and cultural dimensions.

Replica evokes something significant about our current culture, but here again is another paradox: the album was largely constructed from samples of daytime and late night television commercials from the 1980s and early 1990s. But these sonic fragmens – sub-syllabic speech, vocal hiccups, musical debris – don’t sound tethered to a past era. Where chillwave artists coax nostalgia from sounds caked in historical and cultural residue, Lopatin makes these once-recognizable sounds feel strange and only distantly familiar, emblematic of our times. Sample and remix cultures have now influenced all aspects of contemporary creativity, and we live in an era that exists somewhat out of time, fashioning a new present from fragments of the past that are recontextualized with blinding speed. Replica captures our unique moment in time, poised to move beyond our feeling of being caught in an already outdated present. It seems there is no contemporaneity anymore and everything we do is already a relic of the past. This odd feeling, captured so well by the immersive drift of earlier Oneohtrix albums, is something like what Francis Fukuyama has called “the end of history.”

But the recent outpouring of protest around the world has evinced fractures in the complacency that tolerated this impostor of a utopia, once hermetic and existing beyond time. These recent events suggest the glimmers of history being restarted, like the needle of a record that was caught in a groove suddenly nudged out of its repetitions. Perhaps this analogy is itself outdated. Instead, let’s examine a singular artifact of our digital age: the animated GIF, found everywhere on the internet. These files, essentially image loops, capture the predominant cultural fears of our era. In them, we see human activity turned disturbingly mechanical: gestures primed for remix, degraded fragments from a previously unified cultural whole (the conventional standard for aesthetic integrity). Lopatin’s Replica enacts this same drama, using sounds rather than images. In one enigmatic song chillingly named “Child Soldier,” crisp and brief vocal samples dance around in a burlesque of humanity’s fundamental malleability, the way we can be made to perform like puppets through digital manipulation or good, old-fashioned coercion (much like a child soldier). Lopatin then introduces waves of emotive, soothing tones that grandly clash with the disembodied samples, a reminder that no matter how unfamiliar and seemingly inorganic our culture becomes, we will always find “new ways to stay human” (as Alexis Madrigal has quoted one of his Twitter followers in response to Zadie Smith’s critique of social media culture). Following “Child Soldier” is the album’s final track “Explain,” its most candidly sentimental moment, full of simple melodies illustrating a point Madrigal makes about MIDI: no matter how inorganic and degraded the latest digital music-making tool sounds, humans “get a hold of it and reinflate it with meaning.” Lopatin weaves ghostly voices into “Explain” that, for all their disembodiment, sound tender and welcoming, an image of the best instances of today’s youth culture creating something sincerely meaningful out of fragments.

Perhaps fragments are all we have left today, but Replica suggests another reason why so much contemporary art embodies this sample/remix/mash-up aesthetic, hinting at the connection between culture and the OWS protests. Lopatin has fashioned Replica out of sounds from the most insipid, sinister cultural channel, advertising, but in the process, he silences its monotonous discourse. The album’s frequent tonal shifts and juxtapositions succeed in embodying a cultural attitude identical in nature to OWS, one that gladly renounces the commentary of manipulative power and authority and instead embraces diversity and difference. In fact, Replica has less to do with mechanical processes, such as advertising’s manipulation of consumers, than it does with bringing to life a sort of lush cultural ecology. Cultural conservatives dismiss certain contemporary creative practices – genre-hopping, stylistic multiplicity, collage, intertextuality – as merely “po-mo” or else cynically tie them to ADHD, but few have paused to consider the democratic nature of these aesthetic choices, their fundamental political significance. If OWS has recently assembled America’s most flexible and inclusive protest coalition, signs in youth culture have been pointing this way for years. The great point of confluence for all this is, of course, the internet, which not only made OWS possible but also facilitated Lopatin’s purchasing of his album’s source material.

Replica’s title may sound foreboding and inhuman, but fundamentally, Lopatin’s music is not all that unlike a collection of digital music boxes, loops arranged and set in motion rather than performed, each locked into their own shimmering automatisms. What’s new in Replica is how Lopatin’s found a way to make these fragments sing in warm, human tones. It’s an accomplishment that fittingly mirrors the way young people in the United States have found their own political and cultural voice and, like Lopatin, are now fashioning a new future from the past’s fragments.