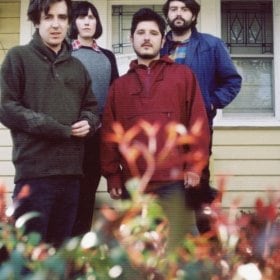 [xrr rating=3.0/5] Australian band Twerps’ self-titled debut album is a bit like a well-meaning person who cannot help but repeat the same mildly interesting story to anyone who’ll listen, maybe throwing in some slight variations, exaggerations or outright lies with each retelling: it holds your attention the first few times you hear it, but after that it becomes predictable and a little dull. That’s not necessarily meant as a total slight; in life few things can be as reassuring as routine, and there is unarguably something very familiar and comforting about the Twerps’ debut.

Indeed throughout the album these four Twerps – Marty Frawley, Julia McFarlane, Rick Milovanovic and Pat O’Neill – craft strong songs that sound wonderfully effortless yet tightly focused. The melodies are the types that lodge gently in the brain, whether it’s on the devotional, acoustically-inclined “Peculiar,” the group vocals and splatters of reverb on “Don’t Be Surprised” or the acoustic-electric guitar interplay of opening track “Dreamin.” Twerps is a warm, inviting album, its occasional bursts of volume, as on “Don’t Be Surprised” and “Jam Song,” tempered with a mellow, sedate disposition. The band’s members work well together and play like a band with experience beyond their years; all told Twerps is a promising first full-length effort.

But the album’s scope is severely limited, a trait that often makes it tedious and redundant. Each song’s general formula basically boils down to declarations of fidelity mixed with minor bouts of self-loathing and the periodic ill-tempered, agitated putdown. That approach plays for a little bit, but not long enough: by the album’s middle section its charm starts to wear off and, at least thematically, the songs become quite mundane. Such narrowly-defined lyrics of course don’t have to be poetry or worthy of Stephin Merritt, but heart-on-sleeve sentiments like, “Your love gets me through the day/ And that’s just what I want” and “I just wanna let you know/ That I love you so” feel somewhat hollow, even more so when they occur as if the band had a how-to manual at the ready. Perhaps most egregious is “Bring Me Down,” a goofy spoken word song that starts with a reference to shoelaces being in a knot and quickly fizzles out with a done-to-death mention of how some heartbroken dude needs to split town.

Still, Twerps is a likeable, pleasant enough listen, simplistic lyrics be damned. Don’t be surprised to find yourself humming some of its melodies or singing some of its lines days after you’ve been listening to it. A shame, though, that what you’ll be singing is often the stuff of stupidly lovestruck high school kids.