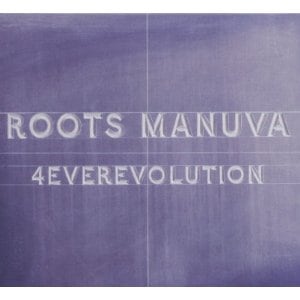 Roots Manuva is always coming in second. The London rapper will always suffer being the subsequent search term after the far more popular Philadelphia band, but he’s built a loyal following in the last two decades with his special brand of dancey and trippy hip-hop with an introspective ear and personal lyrics that are much too smooth to denigrate as “emo.” Long identified by critics as one of the most distinctly British artists in his genre, he flirts with grime but doesn’t get too dirty, spins clever yarns over slick beats and overall has a confident swagger in his voice that instantly draws one to whatever track he’s currently on. Having had the pedigree of jumping on with greats like DJ Shadow and Gorillaz, Roots’ solo styles do not lose an ounce of his personality.

His latest, 4everevolution, is like the Schlotzky’s Deli of music- stupid name, serious album. This record is rife with energetic, complex beats that never slip into any kind of monotony, and Roots’ flow is as pronounced and confident as ever. He’s a more intelligible Dizzee Rascal and a less maudlin/ fame-drugged Mike Skinner.

Roots’ voice is one of the strongest tools in his arsenal. Tinged with a semi-Yardie drip, he manages to both sound hard as fuck and equally elocutionary. He rhymes clearly, hitting his syllables so as to avoid getting busted on for being British. “Skid Valley” is a delight, with its smooth yet complicated string-based sections and a slinky female hook that didn’t make my eyes roll for the first time in ages. “Who Goes There?” has a dope piano and bass heavy beat with subtle synth squiggles, all perfect accompaniment to Roots’ slightly deeper flow, and his call-and-response chorus sounds vivid and engaged. It never feels like he’s in a room with stems (though he might be in a room with the other kind of stems).

“Watch Me Dance” dares you not to do just that, with a kinetic and fire-ass synth-led squelch groove. Roots also even attempts crooning to the girl he’s trying to impress, and he switches so effortlessly from that into his mildly below double-time swag that it baffles. “Takes Time” is a grim, expansive song, with pitch-stretched loops and stark 808 drumkicks that engender a wonderful sense of dread- it’s the kind of song that would be playing before you got lit up for being in the wrong slum.

The soulful, Estelle-esque singer on “Get the Get” makes a unique intro amongst the grime-tastic synth underpin and leads into one of Roots’ most forward and strong performances on this album. The production on the album is definitely nothing to knock either- these songs are all imbued with serious engineering know-how and an insane talent for catchiness, like the bubbly “The Throes of It” with its spacey synth pops and slightly syncopated drum hits which make it sound simultaneously 16-bit transition music and some next shit from a UK club that we’ll all be listening to next week.

“Much Too Plush” is perhaps the most conducive track on the album, with its whispery keyboard line which is punctuated by a high-pitched synthesized flute whistle that both sounds rad and is an attention-demanding counterpoint to Roots’ relaxed spitting, fitting the title perfectly. Despite eight albums spanning two decades, Roots Manuva has only managed to get sharper and more insightful. Nearing 40, he still sounds as vitriolic and swagged out as he did in his debut records. He’s wiser now, but without the grandiose scale of a Rakim. On 4everevolution he sounds more like a gracefully seasoned professional, the kind who doesn’t trouble himself with beef but could serve it up if necessary. This record indicates that much like his sense for beats, he’s continuously evolving, expanding, but never unrecognizable. He may show up second in searches, but it’d be a mistake to discount him as anything but a soulful force of experience.

Roots Manuva – ‘Get The Get’ by Big Dada Sound