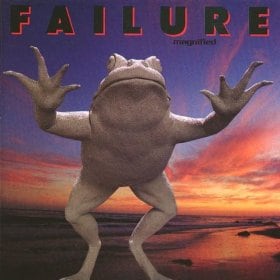 A band ultimately and tragically defined by their name, Failure was all at once ahead of its time and behind the times of the grunge scene. Perhaps that’s the result of its L.A. birthplace. Had this trio been fostered in the epicenter of the Seattle sound, they probably would’ve encountered a more prosperous fate. Like grunge gods Soundgarden, Alice in Chains and others, Failure delivered sludgy, not-quite-doomsday riffs, but instead of recreating the obvious, multi-instrumentalist songwriting duo Ken Andrews and Greg Edwards focused their ideas around left-field bass melodies and drumbeats, with guitar-work acting as mere ornaments. With debut album Comfort, Andrews and Edwards shamelessly conjured an ugly mix of guttural chords, twisting notes and scales stubbornly out of rock radio’s accessibility, but it was Magnified, an equally jarring and distorted 50 minutes, that fully flexed the melodic potential of their grunge-penning prowess, and became a precursor to murky, bass-heavy nu-metal.

An initial disclaimer: Magnified’s esoteric brand of alterna-metal isn’t meant to be relished by everyone, as evinced by the stabbing, uninviting riffs in the callous dirge opener “Let It Drip.” The tone is relentlessly harsh, and foreboding lyrics like, “Breathe your death down/ Cause you will not see/ Let it drip down/ Let it soak your feet” hardly lighten the mood. Failure’s sound, for as shrill as it presents itself, is anchored in comfort by Andrews’ identifiable voice, a midpoint between Kurt Cobain’s raspy croon and the smooth, restrained soul of Jerry Cantrell. Songs like “Moth” and “Bernie” demonstrate an interesting entourage of cacophonous vocal harmonies that become an uncompromising Magnified trademark.

All of this undoubtedly straddled the borders of obsolescence by 1994, but what may turn listeners off – if the freakish riffage already hasn’t – is Andrews’ and Edwards’ elementary structuring. Most of the tracks repetitively exploit their bizarrely addictive 4-bar progressions to the max, inevitably falling into a bit of predictability by shunning improvisational musicianship. Like any great grunge album, Magnified is about addiction; like the best, it’s also very personal. Any structural monotony is redeemed by a keen sense of sonic innovation hardly found in early-’90s mainstream. The duo uses their instruments as a method for alliterating Magnified’s stories (mostly written by Edwards) of insanity, drug consumption, delinquency and disquietude. For instance, the flanger-drenching feedback in “Wet Gravity” builds to climax alongside Edwards’ tale of a young, hopeless addict. Along the leaping tom and bass drums in “Frogs,” they coax droning, high-pitched squeals out of their guitars, echoing lines like, “Frogs are leaping off my brainstem/ They don’t seem to understand.” Magnified is first and foremost a portal to Edwards’ personal abyss, a misery almost palpable due to their meticulous attention to texture.

But even with the praises of major players like Tool, who invited Failure to return for several tours afterward, record label neglect left Magnified teetering on the pinnacles of lost ’90s rock. A music video produced for cornerstone track “Undone” surely would’ve attracted attention had it been aired properly, and “Empty Friend,” the album’s most accessible track, would’ve been an excellent complement playing back-to-back with In Utero and Dirt hits on KROQ. Instead, Magnified will forever belong to a select few able to ascertain its disfigured beauty.