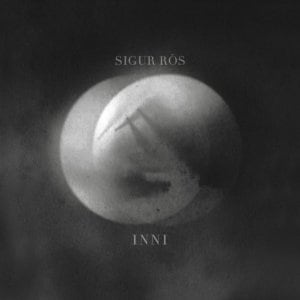 [xrr rating=4.25/5] “Sometimes we feel like we’re putting people to sleep while we’re playing,” Georg Hólm once proclaimed in an interview. The Sigur Rós bassist’s candid honesty reflects the genuine humbleness of the Icelandic orchestral rock gurus we came to know in 2007’s documentary Heima. Perhaps last year’s misfired recording sessions subconsciously echoed this sentiment, leading to scrapped material – a casualty of the aforementioned self-consciousness? – and radio silence. So, what’s a band to do in a writer’s block? Why, throw out a long-awaited, bursting-at-the-seams live album to satiate its patient fans.

And thus, Inni was announced. Whereas Heima presented a diverse, behind-the-music hodgepodge of tour life both on stage and off, Inni’s DVD/double album package captures Sigur Rós exclusively in raw performance mode. While the band has expressed their fondness for playing in more intimate rock clubs – as Holm says, it’s harder to sedate an audience when said audience is standing up and only a high-five away – Sigur Rós’ proclivity for larger venues has never been more apparent. They are an arena band, whether they want to admit it or not, and the ceiling of London’s Alexandra Palace becomes Inni’s only transcendental barrier.

You’d never think Inni was recorded over two nights, thanks to a keen ear for seamless editing that dims applause to (and casually nixes it from) the background. The two nearly identical nights remain almost intact, though in a perplexing decision the popular “Gobbledigook” was tossed on the editing room floor. While the band does touch upon its complete oeuvre, Inni’s hour and 40 minutes unsurprisingly lays heavy on the promotion of more recent fare, Takk and Með suð í eyrum við spilum endalaust, while grazing older albums. With an extensive and widely renowned discography to draw from, Sigur Rós’ could never debase themselves with a shallow, best-hits-to-appease-the-fans setlist. Classic epics like “Svefn-g-englar” will make you a born-again Sigur Rós’ fan, as will contemporary gems like “Við spilum endalaust” and “Hoppípolla.”

Studio-quality recording complements the unadorned band, which performs without their accompanying Icelandic string quartet Amiina. A fresh vitality flourishes in lieu of the grandiose orchestra frills we’ve become accustomed to. Hearing them stripped to their essentials, hearing Jónsi’s voice occasionally strain Hopelandic over the minimal ambience, simply hearing Sigur Rós as a rock band are all among Inni’s pleasures. But Inni’s most prized gem is the hitherto unreleased “Lúppulagið.” Thick, cyclical e-bow swells shimmer over a fragile, parting-ways piano ballad, plateauing in pure epiphany for six minutes. It’s a minimal recollection of Sigur Rós ‘ arc as an artist and, though a bit tacky as an addendum to a live album, adds closure in a way that “Popplagið” doesn’t. Inni: Hardly a substitute for the live experience, but the best snapshot of 2008 Sigur Rós we can ask for on plastic.