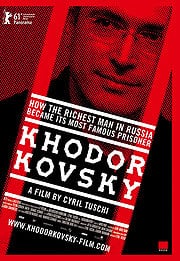 [xrr rating=3.5/5] It’s probably not a coincidence, according to the very subjective but very determined Khodorkovsky, that Russia’s richest man is also one of its most unfairly imprisoned. Chronicling the eponymous industrialist’s meteoric rise, from the fall of communism to his status as one of the world’s youngest billionaires, then on to the souring of his relationship with the Vladimir Putin regime and their subsequent smear campaign against him, the film paints Mikhail Khodorkovsky as a very stubborn man, but also a decidedly innocent one.

Director Cyril Tuschi pinpoints Khodorkovsky – currently serving a long jail term for corporate crimes, embezzlement and tax evasion – as a symbol for the problems at the heart of Russia’s government, a shadowy regime with a predilection for bending the rules. Even with his formerly beloved status as one of the country’s favorite sons and vociferous defenders here and across Europe, most Russians seem convinced of his guilt, despite the lack of evidence and shady court proceedings, which have led to an increasingly extended sentence.

Before getting into trouble, Khodorkovsky made his fortune through a plucky combination of luck and business acumen, riding the wave of capitalism that flooded the former Soviet Union with new capital. But his biggest break came when Boris Yeltsin decided to sell off one of the country’s largest oil petroleum concerns. Wary of handing over Russian resources to a foreign firm, he undersold to one of Khodorkovsky’s companies at a drastically reduced rate. In the nascent capitalist market, no one had nearly enough money to buy it at its real value, so Khodorkovsky ended up with a roughly four billion dollar company, purchased for $300,000,000.

All this insular double dealing, combined with the Putin regime’s eventual attempts to bring the wealthy man down, gives this the air of a mob documentary, a feeling that’s only enforced by events like the 2006 poisoning of Alexander Litivenko. Khodorkovsky embraces these cloak and dagger proceedings to give credence to its accusations. In Tuschi’s view, Khodorkovsky was only guilty of refusing to kowtow to Putin’s demands, something that became increasingly dangerous as the leader’s stranglehold on the government grew stronger.

All this theorizing is supported through interviews and news clips as Tuschi speaks with former government insiders and expatriate entrepreneurs, many of whom started out with Khodorkovsky. It’s a familiar, often tedious format, and while the film never does anything wildly interesting, it still ends up feeling like a solid treatment of the issues, as well as a cogently structured defense. Attempts to move outside this newsmagazine style result in a lot more shakiness, like the clunky monochromatic computer animations that act as interludes. It doesn’t help that, by the final stretch, Khodorkovsky has both made all its points and run out of steam, leaving us with an anticlimactic final interview with the man himself, who’s forthright and intelligent but not especially illuminating about his predicament.