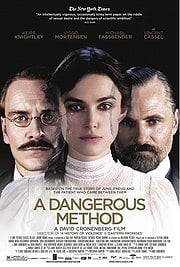 [xrr rating=3.25/5]
David Cronenberg has moved away from the “body horror” that dominated earlier masterpieces such as the The Fly and Dead Ringers and moved inward. No longer is the Canadian director obsessed with the terrible things that could happen to our bodies, but the awfulness that can take place within. After toying with mental illness (Spider), the things that drive us to violence (A History of Violence) and issues with identity (Eastern Promises), it is only natural the director would turn his lens on psychology.

In A Dangerous Method, Cronenberg ramps up the psycho-babble in the war of wills between early 20th century doctors Carl Jung (Michael Fassbender) and Sigmund Freud (Viggo Mortensen). Both men harbor significant issues around sexuality and lingering self-hatred that hangs repressed just below the surface. Beginning in turn-of-the-century Europe, Cronenberg follows his characters over the course of several years as they meet, size each other up and then do battle.

However, one must look closely to see signs of Cronenberg in this deliberately paced film. In fact, it’s as if the director decided to make a costume drama not unlike a Merchant-Ivory piece. We see blood only twice (once in a loss of virginity scene) and if there is violence, it’s suitably repressed. As Jung, Fassbender (who has had a busy 2011, starring not only here but in Shame and X-Men: First Class) has the larger role and spends the first part of the film treating and then eventually bedding patient Sabina Spielrein (Keira Knightley). Fassbender plays his Jung with a cold, Aryan detachment, afraid of his emotions and betraying his distant relationship with his rich wife Emma (Sarah Gadon).

When we first meet Sabina, she arrives at Jung’s Zurich clinic a screaming mess, flailing and slobbering. Knightley, who attempts a Russian accent, overdoes it here and there isn’t a moment on the screen where she doesn’t appear to be “acting.” In fact, next to co-stars Fassbender and Mortensen, she threatens to slide into parody and thereby derail the entire film with her facial contortions and shouting.

After an encounter with Dr. Otto Gross (Vincent Cassel), who rails against the shackles of monogamy, Jung realizes that suppressing his desire for Sabina goes against his very human nature and takes her as a lover, helping her fulfill her own father-daughter and spanking fantasies. Once Jung “cures” Sabina of her affliction, A Dangerous Method evens out and focuses more on the relationship between the two doctors. Freud, desperate to legitimize his field, argues with Jung to stay away from telepathy and other arenas that will give the cynics more reason to rebuff psychotherapy. But Jung is unconvinced and unable to break away from viewing Freud as a father figure, echoing Sabina’s own hang-ups.

For a David Cronenberg film, A Dangerous Method is an anomaly. It is refined and slowly paced. Much like his characters, Cronenberg keeps his camera purposeful and deliberate. Just as shocking as when Scorsese took a left turn with Age of Innocence, A Dangerous Method is a subtle and refined look at two pillars of psychology who helped define a modern medical field. Too bad Keira Knightley couldn’t hang with the big boys. Less histrionics would have served this already quiet film even more.