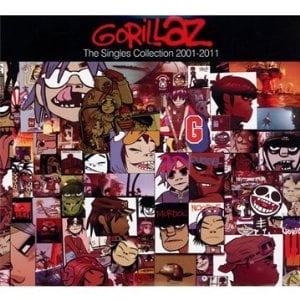 [xrr rating=3.0/5]
Everyone’s favorite virtual band is turning 10. A decade after their self-titled debut introduced the world to a multimedia hybrid of genre-defying music and pop art, Gorillaz – as unconventional a band as they come – has for once stuck with convention and dropped a singles collection. A creative project first conceived in 1998, Gorillaz was formed as a collaboration between Blur frontman Damon Albarn and Tank Girl co-creator and illustrator Jamie Hewlett. An animated foursome of rock star caricatures – 2D, Murdoc Niccals, Russel Hobbs and Noodle – emerged from that collaboration and have been the face of the Gorillaz universe since the self-titled debut LP in 2001.

In that time, former Britpop sensation Albarn has released three concept-heavy studio albums (four with last December’s The Fall if you count an iPad as a studio) and, along with Hewlett’s pen and graphic expertise, has sewn together a rich multimedia universe from what must have been — at its inception — an exercise in novelty. But Gorillaz has far surpassed Albarn’s flesh-and-blood projects both critically and commercially and has done so by mashing up elements of pop culture in inventive ways, whether by blending disparate genres, pairing up live action with hand-drawn animation or CGI in elaborate music videos or simply by the unsettling contrasts in the surrealist imagery presented – in the video for “On Melancholy Hill,” Noodle pukes up a live Cyclopic octopus.

The Singles Collection spreads itself across the three major albums, leaning a bit more on 2005’s Demon Days, and throws in a few remixes. It’s not until the second track that Albarn mumbles the iconic “I ain’t happy, I’m feeling glad/ I got sunshine, in a bag/ I’m useless, but not for long/ The future is coming on” lines of “Clint Eastwood.” A decade on, this song (along with other debut singles “Tomorrow Comes Today” and to a lesser extent “19-2000”) shows no signs of aging. Gorillaz achieves a timelessness even when striving for retro.

By the time we reach the cackling intro giving way to silky smooth bass lines in “Feel Good, Inc,” the Gorillaz universe is fully three-dimensional. This track introduces the Demon Days portion, shifting into grimy disco vibe of “DARE” with falsetto vocals motored by an addictive underlying layer of bass and drums. There’s another Eastwood reference with “Dirty Harry” before the Demon Days chunk slows down with “Kids with Guns,” a central piece in an album that many revere as the band’s finest work. From Plastic Beach, “Stylo” swells with synth on the electro-heavy front half before soul legend Bobby Womack wails to stop the world. One of several examples of poor segues, the faux breakfast cereal commercial of “Superfast Jellyfish,” as marketed by the antics of De La Soul, follows. “On Melancholy Hill” closes out the Plastic Beach singles with its sublime electropop that made it the most enjoyable if one of the least danceable tracks on that third album.

There’s a revolutionary theme running throughout Gorillaz multimedia endeavors, both in the visual imagery – often featuring swift land vehicles, submersibles, and airborne vessels – and the post-apocalyptic or post-modern lyrics. Over the course of a decade, Albarn and Hewlett have reanimated zombie and other sci-fi flick tropes, satirized excess and married kitsch with art in ways never before seen. Each album raises the topography of a parallel universe, fantastical lands where strange folk reside.

And they’ve done so with a little help from their friends. The collaborative cornucopia from which Albarn has been able to draw is staggering. De La Soul, Lou Reed, Snoop Dogg, Bobby Womack, Danger Mouse – even the late, great Dennis Hopper lent his best storytelling voice. Hell, Bruce Willis shows up in one of the band’s myriad music videos readily accessible online. While each album owes a great debt to the musical contributions, this has always been Albarn’s project and his vision and oft-falsetto voice have shone throughout the peaks and valleys of the preceding albums.

What’s missing from this collection is literally what’s been left out. I would have much rather seen the vivid imagery and quintessentially Gorillaz bass lines of “Rhinestone Eyes” (originally intended to be Plastic Beach’s fourth single) over the unremarkable “Doncamatic.” And I’d hoped Demon Days’ eternally weird Hopper-narrated “Fire Coming Out of the Monkey’s Head” could have snuck in before the obligatory (yet unnecessary) remix tracks at the end.

With The Singles Collection, gone is what the casual observer might call “filler” and what a fan might call “the soul;” there are no intros or interludes or spoken-word yarns. Arranged chronologically (by album if not by single), the collection is not put together particularly thoughtfully. One could call the collection lazy. But in today’s musical age, where listeners shuffle through songs on their mobile devices, this collection makes perfect sense and places Gorillaz’s greatest hits (if not truly their best work) in one convenient location. To the uninitiated, The Singles Collection makes for a perfect set of crib notes; but for fans, this assemblage of parts remains bereft of the underlying textures and conceptual nuances that make the Gorillaz universe come alive.