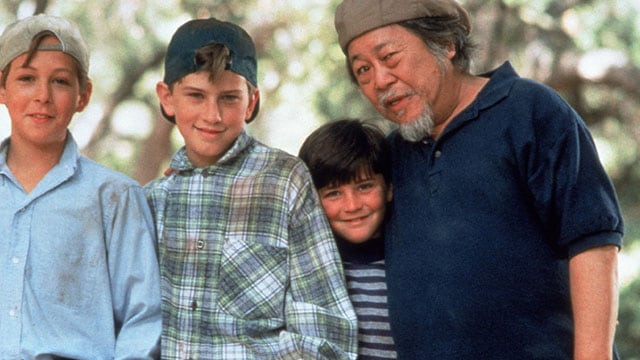 The cynical studio planning that birthed 3 Ninjas was precisely what drew me to it as a kid. By shamelessly leeching from both Home Alone and Teenage Mutant Ninja Turtles, 3 Ninjas basically gave kids the option of watching two films they liked without having to swap out tapes. I must have watched this movie and, worse, its first two sequels dozens of times as a kid, high kicking along with its awkwardly staged action. No, the story didn’t make sense, but the combo of light pranksterism and that early ’90s fad of children learning deadly close-combat skills couldn’t have been more tailored to my childhood loves.

Now, however, 3 Ninjas strikes me as not just a bad movie but also a strange one. Its basic premise features odd racial casting, with three ultra-white kids, the children of two even whiter parents, trained in a secluded cabin by their Japanese grandfather (Chinese-American actor Victor Wong). As a kid, this was totally acceptable; today, Grandpa Mori resembles a cult leader, taking his grandsons away from society and molding them to his beliefs. And like a cult leader, he even gives them new names and identities: Rocky, Colt and Tum-Tum (played by Michael Treanor, Max Elliott Slade and Chad Power, respectively), the latter a roly-poly portent of diabetes to come who always has a quip ready when he manages to process the food that’s constantly in his mouth. All three of the child actors trained in martial arts, but their moves are so awkward that it’s a miracle I was partly inspired to beg for Tae Kwan Do lessons after watching this. 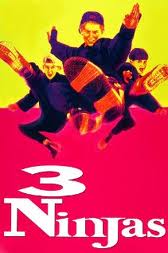 The plot itself is, for all its silliness, incredibly dense. Snyder (Rand Kingsley), master criminal who is also a ninja, thwarts the kids’ FBI father (Alan McRae) and seeks revenge on his former master, Mori. To attack both, he arranges for the children to be kidnapped by…his burnout surfer nephew and the idiot’s two friends. This is a man with an army of ninjas at his disposal, yet to sneak into a home and abduct three targets, he chooses the most unpredictable variables in the world? Then again, the boys are so lackadaisical about the threat of an internationally wanted criminal targeting their family that, at times, it seems anyone could snatch them.

To even try to get into the ludicrousness of this movie would necessitate a listing of inanities, from the basketball duel between two of our heroes and some vague approximation of bullies to the sheer laziness of the Home Alone-esque traps the kids devise when the bumbling kidnappers come. What really throws me, though, are all the cartoony touches. Wacky sound effects abound, and I can think of no other film where jellybeans play a key role not once but twice. It also displays that most amateurish mistake when it comes to comedy, that of the characters practically doubling over in laughter at the lightest joke, desperately trying to transfer their false guffaws to the audience.

In fairness, the sequels are far worse, what with the lads going to Japan (a sort of precursor to the “Jersey Shore” cast shooting in Italy), saving Native Americans from landfill dumping and foiling the world’s most asinine hostage situation with the help of Hulk Hogan. But I still have a soft spot for 3 Ninjas, if for no other reason than as an educational tool. It was my first real example of a film that not only catered to a certain demographic but was also constructed entirely around that market research. “Like X meets Y!” is something of a critical crutch, but movies like 3 Ninjas show that filmmakers themselves fall into that trap too.