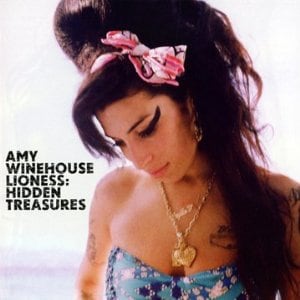 [xrr rating=3.75/5]There’s so much to be said posthumously about Amy Winehouse that it’s hard to know where to begin. Just as with any artist that suffers from some sort of alcohol or drug addiction that dies at such a young age, there are questions about their lasting legacy. Which side of the artist will be remembered; the extremely talented individual and chart success, or the rowdy, jaded, substance-addicted one? Winehouse’s career was always divisive, having both detractors who cited her barely coherent live shows and dedicated fans of her vintage sound and rough charm, so it’s likely that her posthumous legacy will continue in a similar vein. While the argument lingers on, we have Lioness: Hidden Treasures to discuss, the first collection of demos, B-sides and rarities to come out after her death.

Firstly, Lioness is admittedly spotty. As with any set of collections, the range of production quality and overall “albumness” can be a bit of hindrance, but only if a cohesive artistic statement is what you’re looking for. For those looking for a set of songs that show individual songcraft and vocal ability, this is a true gem of a record. More than anything, this is a record that shows Winehouse’s malleability as an artist. Her ability to morph her voice in and out of genres and personas is on full display here, and that may surprise anyone who’s pigeonholed her as an artist strictly appropriating Billie Holiday for nostalgia’s sake.

On tracks such as “Between the Cheats” and the Tony Bennett duet “Body and Soul,” she shows off both her seductive and sweet side. While the former treads familiar ground, with Winehouse portraying herself as helpless against the bad boy types, the latter is a beautiful rendition of the jazz classic that shows her voice dancing between restrained, hushed proclamations of love to held, affecting falsetto. It’s a song that’s been covered endlessly, but the bridging of generations here is undeniable and makes for one of the better tracks Lioness has to offer.

More interesting than the jazz staples though are the alternate versions of Winehouse’s own songs. “Wake Up Alone” may not have the same punch as the Back to Black cut, but the stripped down version, with only nylon-stringed guitar, vocals and brushes on snares, really emphasizes the balladry of the lyricism and arrangement. Even better is “Tears Dry,” the demo version of “Tears Dry on Their Own.” The pace is slowed way down, but the production is still as mean as on Back to Black. The deliberate pace makes for an even more effective chorus, where a wall of supporting vocals back Winehouse’s refrain. Where the album cut had a sense of empowerment, as if tears drying on their own signaled a sense of independence, here it feels more like a lament for the loss of a solid emotional foundation.

Though just about every track is a showcase for Winehouse’s variety of talents, including an alternate punchy cover of the Zutons’ “Valerie,” none is better than her take on the Shirelles’ “Will You Still Love Me Tomorrow?” The production is dense; all staccato horns, backing harmonies, string swells and stop-and-start guitar chords. At the heart of it all is the tremendous vocal take, arguably one of the finest in her entire discography. She sounds removed from the sometimes-harsh vocalist that she was on Frank and Back to Black. Here, she smoothly, gracefully delivers each note with an impeccable precision. Though I risk leaning too heavy on hyperbole, this is an undeniably affecting track: emotionally poignant, moving and technically precise.

There are always going to be those folks who insist on separating the art from the artist. Such a process is futile though, as the addiction-filled life of Amy Winehouse will always inform our listening. With that in mind, Lioness: Hidden Treasures is one of those fine collections that benefits from its varied source material, presenting the different shades of late artist. There are hushed ballads, stripped-down acoustic tracks and the full-blown, ’50s-tinged song that are most associated with Winehouse. All in all, this is a solid collection of songs that show off the undeniable talent and charisma of an artist taken before her time.