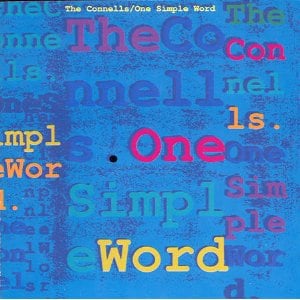 As a consequence of R.E.M.’s recent demise, keyboards across the nation have endured many typings of the phrase “jangle pop.” I never really liked that term as a descriptor for Berry/Buck/Mills/Stipe, as the word “jangle” comes across to me as a low-rent adjective for everything that R.E.M. has accomplished. But really, it’s just meant to define a genre that infuses power pop song structures with a folk-rock sensibility, all the while using guitars (usually with 12 strings and preferably Rickenbacker) that sound more like chimes than buzzsaws. This was the stuff of college radio in the late ’80s, the wave of alternative music before all of the fuzzbox & flannel mania. The Connells were a band of this kind and gentle ilk, paying their dues in the early days with low budget videos that eventually caught the attention of TVT Records (aka TeeVee Toons, the folks who brought you those Television’s Greatest Hits theme song compilations). As comparisons to R.E.M. abounded (whether or not they were fair), so too did the connections, as the Connells recorded their sophomore album, Boylan Heights, in Mitch Easter’s Drive-In Studios. They were moving fast and moving up.

One Simple Word, the fourth in their catalog, is an album that represents the finest that pre-grunge jangle pop has to offer. Recorded in 1990 and situated right in the heart of their discography, One Simple Word is harmonious and earnest, comtemplative through story and allegory. Count the Connells among the bands who name the Beatles and the Byrds as the fathers of their inspirational genealogy. Mike Connell – founder, guitarist and principal songwriter – was not the lead vocalist of the band, so on One Simple Word’s two modern rock hits, the insatiably catchy “Stone Cold Yesterday” and the cryptic heart-bleeder “Get a Gun,” it’s the voice of Doug MacMillan that carried them to the charts. Songwriting credits and turns at lead vocals were spread out on this album more so than its predecessors, with MacMillan lending a hand compositionally and guitarist George Huntley stepping forward to the mic with a handful of songs that flowed from his own pen.

“Stone Cold Yesterday,” one of the Connell/MacMillan tracks, plays like a coming-of-age novelette, the verses introducing characters whose importance lies not in who they are but in what they reveal. It’s an education perhaps in the forbidden things, from the confidentiality of telling (“I want a word with you/ ‘Bout your average Jimmy/ He told me things that I guess I never knew“) to the exhibitionism of showing (“He had an old stand-by/ Not your average Betty/ She showed me things that I guess I always knew“). The chorus is a triumphantly itchy call to action about shaking off inhibitions and wanting to see the world with bigger eyes and a braver soul. It’s about how to harness the fleeting and lap up life with a joyful intake. MacMillan, ever emotive, communicates this desire for transformation on command as he varies the penultimate chorus with a hint of manic impatience: “And I walk!/ And I breathe!/ And I try, no, it didn’t change me/ Don’t it make you wonder, man.”

A foil to the hand-clap pop of “Stone Cold Yesterday” is “Get a Gun,” a ballad whose title deceptively suggests violence but whose composition describes a relationship that is less volatile than it is deliberately sinking. The tempo here is actually quite brisk, but the piano countermelodies buffer down an already minimal guitar presence, leaving Connell’s lyrics and MacMillan’s expressiveness once again in the foreground. “She never listens to me at night/ Get a gun, get a gun/ We’re losing altitude,” is the message of this song, MacMillan’s vocals both raising and extinguishing desperation, as the syllables of “altitude” descend down the chord, mirroring the motif of fated disintegration. Later choruses fold out from a single voice to a two-part harmony; he is singing harder, louder, in multiplicity, and, despite the effort, she still is not listening.

One Simple Word is a collection and not a concept. The moods are diverse: the stormy riffs of “Speak to Me” prove that jangle pop can have a dark, punishing side; “What Do You Want?” is a twee acoustic curtsey; and “Too Gone” is the Connells at their most experimental, cobbling together their signature jangle with synthy piano figures, a snippet of the vocalist’s chuckle, bleating trumpets and a few falsetto measures of ’80s throwback hit “Let the Music Play.” Not all of the songs are fantastic, I admit, and that only gets more and more true the further behind us 1990 gets. To contemporary ears, One Simple Word might sound like it fits into the easy listening subgenre of adult alternative. Pandora probably will confirm this. It seems a shame, though, to resign the Connells to some sheepish footnote in the history of jangle pop. Though some may regard them as a poor man’s R.E.M., the Connells – simply put – made an exemplary record in One Simple Word.