Speaking as a true blue, dyed in the wool science fiction nerd, it may be heretical for me to claim that Stanley Kubrick’s landmark film 2001: A Space Odyssey is overrated. It may even seem paradoxical or quibbling that a movie that is the source of undisputedly powerful pop cultural iconography could possibly be thought of as overrated. But here’s the thing: cinema is not just a form of art; it is just as importantly a source of entertainment. If your audience is not engaged with what you present through what’s seen and experienced on screen, you’re failing both the film and your viewers. And with 2001, Kubrick seemingly set out to make a film detached from humanity and emotion, and succeeded so well that he was left with a boring, antiseptic movie with great special effects. 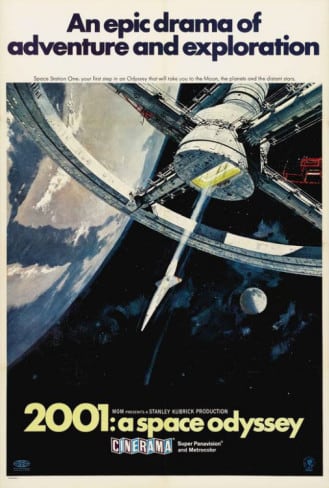 Historically, science fiction in any form doesn’t generally get a lot of critical respect, though the recent spate of thoughtful sci-fi films like 2009’s Moon and this year’s Another Earth may hopefully be reversing that. But while film franchises like Star Wars and, to a lesser extent, Star Trek, tend to be dismissed as movies full of colorful explosions, lasers and minimal story, 2001 has an even greater flaw. It’s a movie filled with technical achievements and conceptual leaps, but no real plot or engagement with its audience. It’s like a tray filled with pristine surgical instruments; functionally perfect, technologically innovative and coldly beautiful, but not engaging. And I don’t believe I’m missing the point here. The director may have fully intended to emphasize the essential alien quality of outer space by creating characters without backgrounds or meaningful dialogue, by favoring scientific accuracy over cinematic potential or emotional resonance. But when those same qualities leave a viewer bored with the spectacle of the Discovery One noiselessly floating through the infinite gulf, that kind of conceptual trickery has backfired. Rather than leaving a viewer with a profound sense of the smallness of man in space, it simply leaves them bored with the movie itself. It’s a fine line to walk, and one that 2001 stumbles upon far too often.

Yes, it’s great in concept for the two primary human characters to be so literally distanced from earth that they figuratively become distanced from humanity, losing personality and emotion. But in execution, that means we have interminable scenes of Dave Bowman (Keir Dullea) and Frank Poole (Gary Lockwood) serving as functions of a machine, rather than as people we care about or even characters with motivation. Great on paper, but simply dull in practice. The lack of care or interest in actual humanity is pervasive to the extent that the scene in which Poole drifts to his slow, icy death in space is notable in that it signifies the malfunction of HAL (voiced by Douglas Rain), the ship’s computer and not for the death of a human being. Similarly, eschewing a describable narrative for an oblique, ambiguous series of four sequences largely linked by a series of highly recognizable images may be artistically ambitious, but it’s alienating to audiences above all. No black monoliths or Strauss scores can change that.

Artistic ambition is something that should be praised and Kubrick doubtless did the science fiction community at large a great favor by classing up the genre’s image for all the critics and acid-filled hippies who came to see the star gate sequence in 1968. But the overarching concerns of 2001 are not so much the themes of the unknowable universe and the indefinable nature of evolution and violence, but how to most accurately present sensations of boredom and bewilderment. It’s certainly not how to present them to audiences to make them interested or even intrigued, but far more in how to calibrate its chilly, self-satisfied perfectionism. As Kubrick was well known for his professional tenacity and obsession with the minutiae of filmmaking, it’s not particularly surprising that his fascination with ensuring scientific accuracy ends up making {2001} a movie engrossing for theoreticians and technicians, but not for the people watching it. For the audience, it’s not a movie you watch, it’s one you just get through.