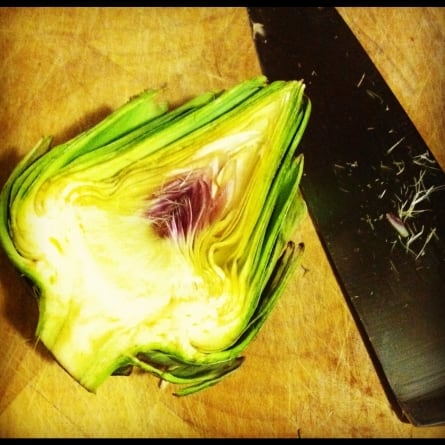 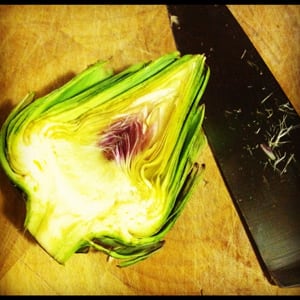 Every so often, we challenge our Twitter followers to challenge us in the kitchen. These are the results.

@bearsurprise wondered how to get the best yield from his hard boiled eggs.

Peeling a hard boiled egg can be one of the most frustrating kitchen tasks there is, in that something seemingly so simple can go so wrong, so quickly. One overzealous tug of the shell and you’re left with a chunk of egg white stuck on the shell and an egg that resembles something akin to a bombed out moonscape rather than the orb of pleasure it’s supposed to be.

Here are a few small steps I’ve learned over the years to help avoid that frustration. First, let’s back up and make sure we all know how to get to the peeling point in the first place. Place however many eggs you want to hard boil at the bottom of a saucepan and cover by at least two inches of cold water. Bring the water to a boil, keep it there for one minute, then shut the heat off and let stand for 12-15 minutes. In the meantime, prepare an ice bath and place the eggs in the bath when the time is up. Let them cool for at least 10 minutes.

The cooling period, for me, is what helps to separate the egg from the shell a little easier. I’m sure there is an infinitely more scientific and engrossing account of why this is so available online. All I know is that I shared @bearsurprise’s frustration for years too until I learned to cool the eggs down before peeling. It was that simple step that seemed to consistently yield intact eggs. After cooling, gently crack the shell and exercise a little patience while you peel.

@distant_cousins replied “Artichokes… GO!” and @prjctk wanted to know what to do with his leftover saffron threads.

We’re going to combine the artichokes and saffron into one dish because the artichokes, like most veggies, lend themselves well to braising and saffron is an all-star utility player in braises like the one we are about to do. Using wine to braise vegetables is an important technique to learn because it can be used with such a wide variety of edible flora and fauna that the possibilities are endless once you learn the base technique. Simply stated, gather some aromatics, good white wine, a vegetable you want to feature and your favorite sauté pan and then experiment to your heart’s content. Fresh herbs are never a bad idea, and some exotic spices judiciously applied – like say, saffron – can’t hurt either. Saffron adds a depth of flavor to any liquid based dish, and combined with the wine here (Riesling in our case), it colors the dish in floral subtlety.

Knowing how to break down an artichoke is the toughest part here. We only want to cook with the heart, because the leaves, while edible, are tedious to eat. Start by peeling off the tough outer leaves, trim the stubby ones around the base and then cut the artichoke in half, cross-wise, discarding the upper half. Peer down into the middle of the artichoke and you will see the “choke,” a cluster of tightly packed, gossamer thin thistles. You don’t want to eat those. Scoop out the choke and peel away the remaining leaves until nothing is left but the fleshy heart.

Now, heat the olive oil in a medium sized sauté pan over medium heat, add the onions and cook until translucent, about five minutes. Add the wine and saffron and bring to a boil. Add the artichoke hearts, cover the pan and turn the heat to medium low. Cook for 20-30 minutes until the hearts are tender and cooked through.

Season with salt and pepper and serve immediately as a side dish. We used the leftover braising liquid to flavor plain couscous and served the hearts over the top of the couscous.

@kylefowe inquired about a proper use for kale.

Kale is one of the most versatile leafy greens around, and works well in everything from stews to smoothies to stir fries. However, using the grill to impart a little smoky flavor on the kale gives it a unique dimension that isn’t attainable with other techniques and it also cuts down the typical cooking time for the leathery leaf. Grilled kale has been a staple in my kitchen for a long time now and the most surprising thing about it, once you get past the fact that you’re grilling a leafy green, is just how filling it can be. Take note, this is not meant to be a feel good side dish to balance out that steak you just grilled. It’s the main event. Served with just a small amount of rice and you’ve got a meal, and a healthy one at that.

Combine all of the ingredients in a large bowl, toss thoroughly to coat all of the kale in the marinade, cover and refrigerate for one hour. Start your grill, the goal whether you have a charcoal or gas grill is to cook the kale over high heat. While the kale is marinating, heat a small sauté pan over medium heat. Once it is hot add the sesame seeds and cook them in the dry pan until they are toasted and golden brown. Remove them from the pan and reserve. If you have a widely spaced grill grate, using a tightly spaced grill basket is highly recommended. If not, leave the kale whole instead of roughly chopping and work around the tough stems. Remove the kale from the marinade and place directly on the grill for 3-5 minutes, until the kale is thoroughly wilted. Toss with the toasted sesame seeds and lemon juice and serve immediately.