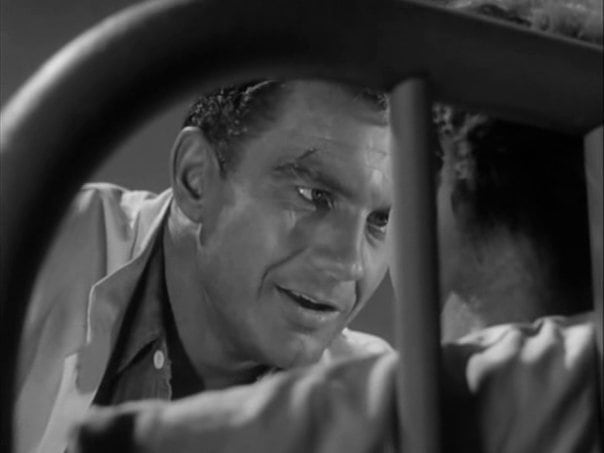 There’s a neat economy to most revenge films, an eventuality that assures you know exactly what you’re going to get, at least in terms of resolution. For Samuel Fuller, this pre-determined outcome, which promises that the four gangsters who take out young Tolly Devlin’s father at the opening of Underworld U.S.A. will ultimately get their just desserts, is a freeing device, allowing the director to immediately begin focusing on setting the trap that will ensnare them.

Fuller spins out the beginning of this nasty story with propulsive thrift, as if too much exposition would have put him over his meager budget. We learn in the first three minutes, through nothing more than a mugging and quick escape, that Tolly is a wayward street kid, and his father is a crook and drunk not above hurting those close to him to get his way. Fuller hops from this opening to the murder scene, brilliantly conducted entirely in shadow, then to a great montage charting Tolly’s development through a series of forms of all kinds, from the one recording his refusal to testify against his father’s killers to the ones admitting him in one prison after another. 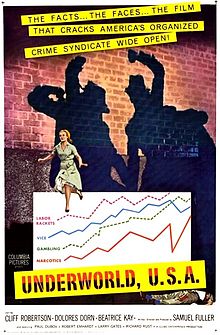 So at this point, less than 10 minutes in, we have a full picture of a character, sketched out through a variety of styles. Additional backstory becomes clearer as the film progresses. Tolly doesn’t involve the authorities because, even as a fourteen-year-old punk, he’s ready to take care of business himself. He’s constantly in and out of prison not because he’s an incompetent crook, but because he’s on the hunt for Vic Farrar, the only one of the killers who he knows by name. Farrar is serving a life sentence, and Tolly finally tracks him down in a prison hospital, where he wheedles his way into a job, putting him in the position to in turn wheedle information out of Farrar before speeding along his death.

Fuller’s films are often brutal, but they’re generally strongly humanist pieces with great love for their characters, even in settings as insane as the war zones, gangland backrooms and insane asylums in which his films play out. But like most revenge stories Underworld U.S.A. is ostensibly a cautionary tale, which gives Fuller license to be relentlessly vicious, with great murder set pieces that range from a man consumed in a flaming car to a messy pool drowning. One character receives one of the great loping death staggers of all time, captured mostly in a single shot, the camera swirling around him as he drags himself along the street, finally dying beneath a ‘Give Blood’ poster in an alley.

Underworld U.S.A. is Fuller’s last traditional gangster picture, and while it’s not his best, there’s a spring-loaded menace to it that makes it among his most rewarding films. The complex trap that Tolly springs, which involves playing both sides of the law, as well as the cold obsessiveness of his vendetta makes it feel, if not overtly influential, at least strikingly modern.